Hilman and Haji Marjan's relationship dynamics is quite intriguing 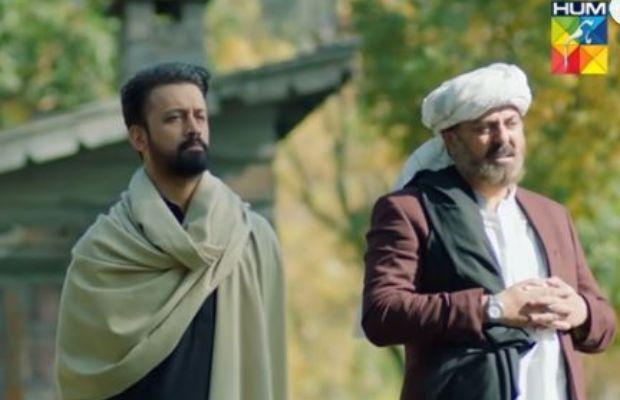 Sang-e-Mah the newly started drama serial at Hum TV continues with its ongoing mystery. The characters come with their baggage and they are super intriguing. This episode too belongs to Atif Aslam who is shining throughout the episode with his brilliant performance. In the previous episode, the story and characters seem intriguing. In this episode too the mystery continues.

The issue of Ghaag is raised in this play. Ghaag is a Pashtoon ritual in which a man announces his possession over a girl claiming her as his by opening fire in front of her house. This ritual has ruined the lives of many girls. The writer has very carefully raised this issue of Ghaag in this play I have not heard about this ritual before.

Hikmat Khan tells Gulmeena that he is left with no option but to Ghaagh her. Gulmeena reacts very strongly to this, she says it’s the biggest insult any girl can have. Gulmeena forbids Hikmat Khan to attempt any of such folly. The irony of the situation is that on the other hand, Hikmat Khan’s father Haji Marjaan is heading a jirga in which he has to punish Saabz Khan for committing the sin of Ghaagh. His own son is thinking to commit the same crime.

Saabz Khan seeks help from Hilmand who initially behaves as if he does not care and he snubs him but later when Jirga is all set he appears out of nowhere it seems that he goes there to belittle his father rather than help out Saabz Khan. Saabz Khan is claiming that he was intoxicated when he committed that crime but he is lying. Haji Marjaan frees him from Ghaag charges but then he says that he needs to get punished for drinking and for that he is given 120 lashes.

The dynamics of Hilmand and Haji Marjaan’s relationship are quite confusing yet intriguing. It seems that he is not his real father. I have read somewhere that Hilmand is quite similar to Hamlet. Mastaan Singh, is yet another intriguing character one wonders what sin he has committed for which he has imprisoned himself? We get to know that he works for Zarghona. Hikmat Khan talks with his khala and asks for Gulmeena’s hand. Zarghona agrees on the condition that she will agree if he will bring her mother and father both. Hikmat’s mother goes to Zarghona’s place but there she cracks quite an inappropriate joke and Zarghona hears that joke and she gives her a befitting reply.

tweet
Share on FacebookShare on TwitterShare on PinterestShare on Reddit
Rameeza NasimJanuary 17, 2022
the authorRameeza Nasim
Rameeza Nasim, a Paralian, passionate about poetry, drama and fiction. By giving drama critiques I feel like I am endorsing the writer's message to the audiences, I love my job. Being a critic responsibility lies on my shoulders to point out the flaws and shortcomings of the play be it on writer's , performers or director's end . I did my Masters in English Literature and Linguistics .
All posts byRameeza Nasim