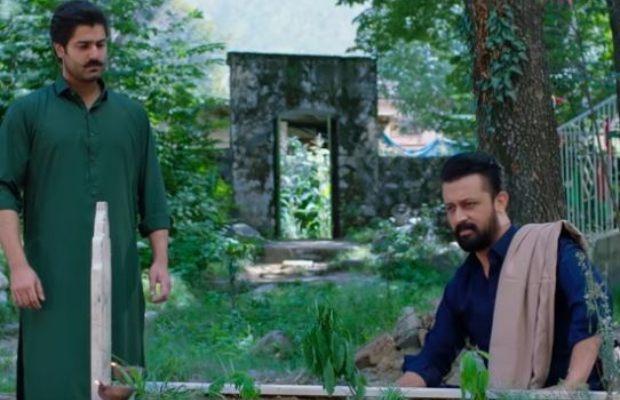 Sang e Mah the Hum TV drama serial with its recurring themes of Helmet making it one of the most beautiful adaptations. Apart from the Hamlet theme, the poetic diction and the setting also give Shakespearean vibes. The writer Mustafa Afridi deserves all appreciation for creating such an engaging and beautiful story and intriguing characters. In the previous episode, Hilmand commits Ghaagh at Gulmeena’s house. In this episode, he is so blinded by his madness and revenge that he does not believe Hikmat and his love for Gulmeena.

Hilmand after committing Ghaagh, tells on his father’s grave that he has committed Ghaagh at his wife’s enemy’s place well what benefit does Hilmand is going to have with this Ghaagh? and why Zarghona is having grudges with Haji and family we really intrigued to know that. Well, we are simply in love with the poetic dialogues Hilmand utters in this play.

Hilmand’s dynamics with his stepbrother Hikmat are very beautiful and interesting. Despite having so much hatred for his stepfather, Hilmand truly loves his stepbrother with all his heart and Hikmat too respects him very much. Hikmat tells Hilmand that he has wronged him by committing Ghaagh at Gulmeena’s place he tells him how much he loves her.

Hikmat is so blinded in his pursuit of revenge that his madness cannot see Hikmat’s love for Gulmeena. He thinks that Hikmat is doing that on Haaji Marjan’s orders and it is a tactic by his stepfather to slow him down. Later we have seen that Hilmand is having second thoughts that his brother might be right in his claim of love and if it is true then he has wronged his brother. Strangely Hilmand should hate his brother but he loves him. Hilmand’s friend misguides him by saying that Hikmat is lying as they have never heard anything about Gulmeena and him.

Haji Marjaan tries to send Sheharzade away so she cannot meet Hilmand but she has sensed that something is wrong she goes to Gulmeena’s place but Gulmeena rudely treats her and she and Zarhghona both shoos her away from their house refusing to tell her anything about Ghaagh. Haaji Marjaan once again gets Sheharzade to her Hujra where she comes to know that it is Hilmand who has committed the Ghaagh, not his son Hikmat. The way Sheharzade is being nice and caring towards Sarghana looks so nice. We are anxiously waiting for another Sheharzade and Hilmand’s encounter.

tweet
Share on FacebookShare on TwitterShare on PinterestShare on Reddit
Rameeza NasimFebruary 7, 2022
the authorRameeza Nasim
Rameeza Nasim, a Paralian, passionate about poetry, drama and fiction. By giving drama critiques I feel like I am endorsing the writer's message to the audiences, I love my job. Being a critic responsibility lies on my shoulders to point out the flaws and shortcomings of the play be it on writer's , performers or director's end . I did my Masters in English Literature and Linguistics .
All posts byRameeza Nasim