Hooriya goes with Asfand without informing her parents 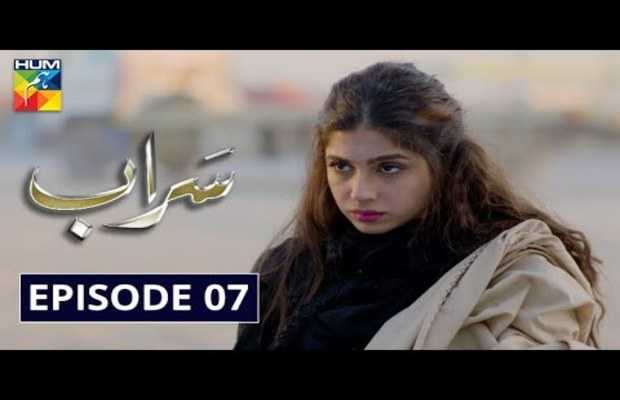 HUM TV’s drama serial Saraab is a play that moves around a mentally ill patient suffering from an advance stage of schizophrenia. The story shows how miserable her life is, and how her lover is trying to figure out her problem and trying to help her out of it. Sonya Hussyn and Sami Khan’s performance are very impressive. However some of the supporting cast seems to be short in performance.

Asfand is the only person who has realized that Hooriya has some psychotic problem and going to Peers and Darghas is not the solution for it. He has also realized the dangers and risks Hooriya might face in going places like Dargah so he has made up his mind to rescue Hooriya from that place. He asks for help from his father who stops him from this action, later in the middle of the night Asfand sneaks out of the house and head towards Dargah to help out Hooriya.

One of the scariest scenes is when Hooriya is having hallucinations at the Dargah as well, she sees Asfand comes to help her out and he asks her to run away from this place. She. in the middle of the night goes out of the room alone at the shrine and there a man who finds her alone tries to attempt on her but Hooriya runs away and  while running she meets the real Asfand. Asfand has realized that the dangerous situation Hooriya is in. He rescues her from that place.

The next day when Hooriya’s mother finds her nowhere, she and her husband start searching for her. Hooriya has left without informing her parents. Hooriya is out on the highway with Asfand and his friend all night. Asfand’s parents are so angry and embarrassed about their son’s act. Hooriya tells Asfand that she does not want to go back to her house, she wants to live with him here at this place.

Asfand’s parents inform Warda about Asfand’s act. They are very embarrassed but Warda misbehaves with them and asks them to leave the house. She is just like her mother very rude and mean. Hooriya is a bit scared from last night’s incident she is not letting Asfand leave her even for a few moments. Hooriya is a bit paranoid too the way she feels that Asfand’s friend is laughing at her indicates that Paranoia is a symptom of having a serious mental illness. Will Asfand be able to help Hooriya in her treatment and will Hooriya’s parents are going to accept her after this?

tweet
Share on FacebookShare on TwitterShare on PinterestShare on Reddit
Rameeza NasimOctober 3, 2020
the authorRameeza Nasim
Rameeza Nasim, a Paralian, passionate about poetry, drama and fiction. By giving drama critiques I feel like I am endorsing the writer's message to the audiences, I love my job. Being a critic responsibility lies on my shoulders to point out the flaws and shortcomings of the play be it on writer's , performers or director's end . I did my Masters in English Literature and Linguistics .
All posts byRameeza Nasim