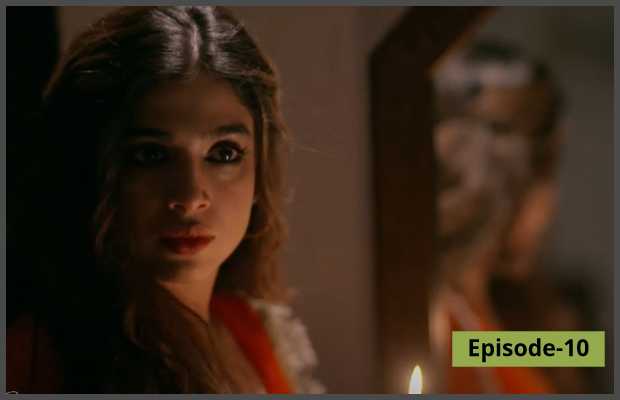 HUM TV drama serial Saraab is a play which is creating mental health awareness, it revolves around a schizophrenic girl Hooriya (Sonya Hussyn) whose own family is not ready to understand her mental illness. Hooriya has an advance stage schizophrenia. In this episode, we have shown that Hooriya’s illness is getting intense and she needs immediate treatment.

Hooriya hallucinates her cousin Asfand more often. She once again hallucinates that he is in her room sitting on her bed. She tells him that how her sisters are taunting her, he tells her that she does not have to take them seriously as they are jealous women then we have seen that Hooriya feels better and she is now ready to face whatever comes in her way.

Well, Hooriya’s family is the most pathetic. The way her mother imparts the news of Hooriya disgracing their honor is not less than a farce. She is so pathetic, even if it is true instead of covering her daughter she has told this to her husband in a very inappropriate manner. Father’s reaction is somehow natural and Aurangzeb Laghari has brilliantly played that part.

Hooriya’s father is after her, he literally wants to kill her. Warda and Namal try to save Hooriya. Namal takes Hooriya out of the house and locks the door so she can be saved from her father’s wrath. Hooriya is terrified to death and moreover Namal taunts her that Asfand is not going to come and save her. The only solution Hooriya finds is to run away. She runs barefoot on the streets to Asfand’s house telling them that she does not want to go back to her house and also she tells them that her father is going to kill her.

Hooriya’s delusion is touching new heights. She tells Asfand’s sister that Asfand has done wrong with her, he has disgraced her, shocking both Asfand’s mother and sister. Her mental condition is very alarming and it says that she needs immediate treatment. She is believing an incident to be true which has not happened at all. She thinks that Asfand has raped her or that they have built a consensual physical relationship. In the previous episode, she is behaving like she is having pseudo pregnancy symptoms. Hooriya’s mental state is very alarming, she needs to get treatment on an immediate basis but no one in her family is ready to understand her mental condition.

tweet
Share on FacebookShare on TwitterShare on PinterestShare on Reddit
Rameeza NasimOctober 23, 2020
the authorRameeza Nasim
Rameeza Nasim, a Paralian, passionate about poetry, drama and fiction. By giving drama critiques I feel like I am endorsing the writer's message to the audiences, I love my job. Being a critic responsibility lies on my shoulders to point out the flaws and shortcomings of the play be it on writer's , performers or director's end . I did my Masters in English Literature and Linguistics .
All posts byRameeza Nasim