Asfand wrongly accepts that Hooriya and he had physcial relationship 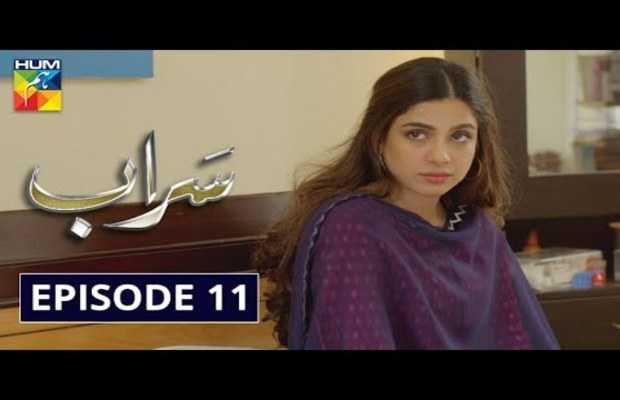 Saraab the drama running at HUM TV is addressing a very serious mental health issue. The story revolves around an advance stage schizophrenic girl Hooriya and her family is shown seems to be so pathetic which is truly reflecting the reality. This is the kind of negative support unfortunately people who are facing mental health issues get from their family. Only Asfand is the one who understands Hooriya’s mental condition.

The episode begins when Hooriya refuses to meet her mother and locks herself up in the room. Her mother is creating so much fuss, she starts cursing Asfand’s sister saying that whatever she has done with Hooriya, she will face the same too.  Asfand tries to calm down Hooriya’s mother, he tells her that he will go and talk with Hooriya.

Hooriya opens the door of the room only for Asfand and she tells him that she wants him to do their Nikkah as soon as possible and then she refers that they have done something wrong. Asfand is shocked to hear this from Hooriya but Asfand is such a gem of a person that in order to save Hooriya he goes to the length of accepting whatever Hooriya is saying in front of her mother so that her parents will marry her off to him and then he will be able to take her for treatment.

Asfand is of the view that Hooriya’s family is not good for her mental peace, he wants to marry her as soon as possible as he is fearing that Hooriya’s mental state will get worse if he delays his wedding and let her stay with her toxic family. Hooriya’s mother creates lots of fuss about Asfand acceptance, she tells her husband that the only solution is to marry her off with him.

Asfand parents take Hooriya back to her house and try to talk with her parents. Well, we were expecting that Hooriya’s parents knowing that how pathetic and loud they are, they will react very badly to them but surprisingly they have not uttered a word, when Asfand’s father asks him for Hooriya’s hand they do not refuse, they say that they want some time to think. This is a major development. Thank God there is not any scene of Warda in this episode yelling at the top of their lungs. Well we are wondering, will Asfand be able to cure Hooriya’s mental state?

tweet
Share on FacebookShare on TwitterShare on PinterestShare on Reddit
Rameeza NasimOctober 31, 2020
the authorRameeza Nasim
Rameeza Nasim, a Paralian, passionate about poetry, drama and fiction. By giving drama critiques I feel like I am endorsing the writer's message to the audiences, I love my job. Being a critic responsibility lies on my shoulders to point out the flaws and shortcomings of the play be it on writer's , performers or director's end . I did my Masters in English Literature and Linguistics .
All posts byRameeza Nasim