Asfand too senses that there is something wrong with Hooriya 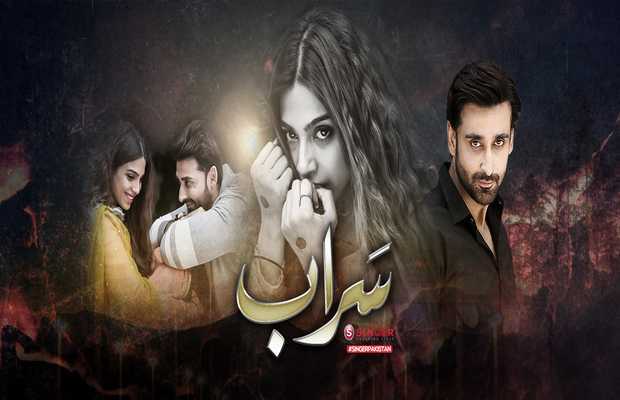 HUM TV’s drama serial Saraab deals with a very sensitive issue related to mental health. Hoping that the makers of the play sensibly deal with such a sensitive theme and it seems that for reviewing this drama I need a thorough research on this mental illness, schizophrenia as it is a very sensitive topic to talk on but it is kind of a topic that badly needs to be addressed. Sonya Hussyn has beautifully played her role as Hooriya a girl who lives in her own imaginary world which she has created in her head and her state of mind is often mistaken by her family as some supernatural influence or magic.

Hooriya (Sonya Hussyn) in the middle of the night wears makeup, lit her room up with candles and starts dancing and smiling, her sister Namal (Nazish Jahanghir) hears some voice from upstairs she goes at her room and through her window she sees the scene where Hooriya is exuberantly dancing holding the candle with her full makeover. Namal gets so terrified to see her sister in such a state that she brings her mother to see that through window and she too mistakes this state of mind of her daughter as some supernatural influence. Instead of taking her to some psychiatrist, she is thinking to take her to some Peer. It is so common in our part of the world where people do not understand the importance of mental health and often mistakes it with some magic or Jinn influence.

Warda’s brother in law’s passion to marry Hooriya is not making any sense. He shares his desire to marry Hooriya with his mother who gets offended and she thinks that it is Warda who has influenced her son with this idea of marrying her sister. She once again insults her daughter in law and taunts her that her sister must have an ill fate like her so she is not going to make her daughter in law.

Asfand, on the other hand, is too restless, he eventually discusses with his parents his desire to marry Hooriya on which his parents have no issue, his father is ready to talk with Hooriya’s father but his mother thinks that Hooriya’s mother will never let this happen and she is right. Hooriya’s mother is a very strange kind of character too cold and lacks compassion. Although Asfand is her nephew she dislikes him and strongly opposes the idea of Asfand and Hooriya’s marriage when Hooriya’s father discusses it with his wife.

Hooriya in her imaginary world is creating a deeper and stronger bond with her cousin Asfand than in reality. Asfand in her imaginary world is more close to her than in real life. Hooriya often shares with Asfand that he is sitting with her a moment ago and also that he has promised her that he will talk about her to his mother when in reality he has not talked about this matter with Hooriya. Asfand has sensed that there is some problem going with Hooriya but what she is going through, he has no idea. Will Asfand be able to figure out Hooriya’s mental illness?