Saraab Episode 3 Review: Hooriya jumps into conclusions through her imagination 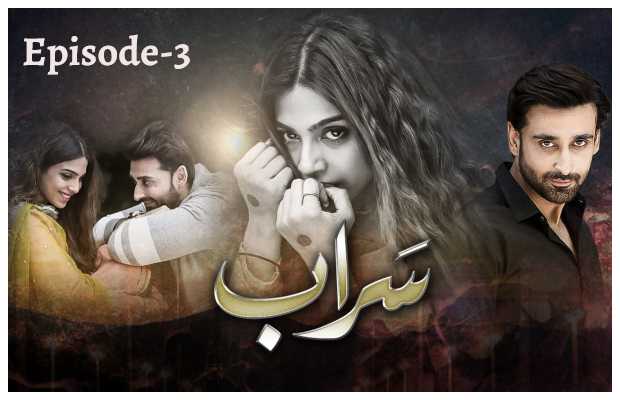 Saraab, the drama serial airing at HUM TV is addressing a very sensitive issue of mental illness. The protagonist of the play Hooriya beautifully played by Sonya Hussyn is a girl who is fighting schizophrenia. Sonya Hussyn’s performance is simply outstanding in this episode.

Well, what has shown about Hooriya up till now in this play indicates that she is suffering from advanced stages of schizophrenia where she gets hallucinations and illusions, she can actually feel what she is imagining as real. Her family has not yet detected her illness in the initial stages makes sense as the family seems quite backward, they are mistaking her illness with some supernatural influence.

Warda’s brother in law’s passion for Hooriya is not going away, he is insisting his mother to agree for the proposal and on top of that out of nowhere, Warda’s husband tells her mother that he has agreed for second marriage but before that, she has to let his brother marry Hooriya, well it seems that he is tricking his mother but what a stupid way of convincing his mother. His mother agrees for this proposal and they are all set to go to Hooriya’s house to ask for her hand.

When Hooriya’s father asks her consent about this proposal she boldly rejects this proposal and she does not shy out to tell her family that she likes Asfand and he will soon send his proposal for her. Namal gets upset on hearing this, she snubs her for taking Asfand’s name. Hooriya’s parents are also shocked and her mother is not at all ready to accept Asfand. Well, Hoorriya’s imagination is not always pleasant. full of romantic or dreamy stuff, she also sees tragic and disturbing things which make her upset. She then jumps into the conclusions through her imagination.

Hooriya hallucinates Asfand telling her to agree for this proposal as their marriage does not seem to happen, so it is wise for her to follow whatever her parents are telling her to do. It makes her so upset as she passionately loves Asfand and expects him to love her in a similar way but guided by her illusion, Hooriya decides to agree for Warda’s brother in law’s proposal. She says yes to her father but she is extremely sad over Asfand’s coldness but in real poor Asfand when comes at her place Namal refuses to open the door telling him that her parents are not at home.