Asfand is trying hard to help out Hooriya 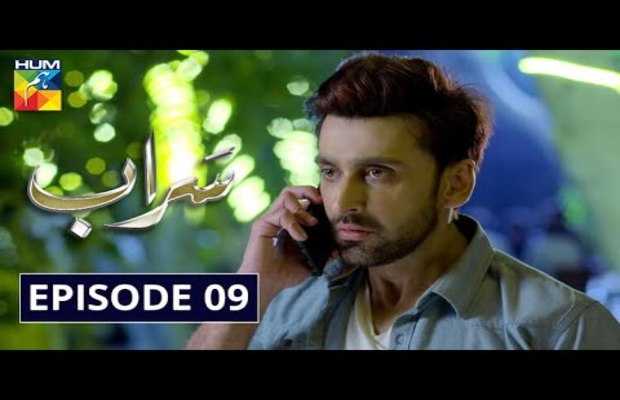 HUM TV’s drama serial Saraab is a play based on mental health issues with the protagonist Hooriya is shown an advance staged schizophrenia patient. The play is very effectively portraying how a girl having such serious mental illness is being badly treated by her own family and how much troubles and trials she goes through. Sonya Hussyn and Sami Khan have given brilliant performances but the supporting cast’ s performances seems short.

The episode begins when Hooriya’s sisters blame her for disgracing their family honor by spending the night with Asfand. Well with their sisters’ accusations Hooriya starts having delusions that Asfand might have done something wrong with her that night and now since he has used her so he will now leave her and anticipating all these with her delusions she calls Asfand and shares her concerns with him, Asfand has shocked to hear all this.

Asfand is appalled to know what Hooriya thinks about him, he tries his best to assure her that they have done nothing wrong but Horriya keeps crying. Namal hears all this conversation of Hooriya with Asfand and she figures that Asfand and Hooriya have disgraced their family honor. She shares this with her mother and sister and their reactions were simply horrendous.

Before this scene, Asfand’s father goes to Hooriya’s house to talk with her father but he is in no mood to hear anything, he has made up his mind that he will never marry off Hooriya with Asfand no matter what happens. Well, one wonders why he is being so persistent why he is not letting Asfand marry Hooriya when he knows that they so passionately like each other. Asfand is not a stranger but his own nephew, knowing Hooriya’s mental state would it not be the best idea to marry her off in the family as they will understand her better.

Asfand is restless when he hears Hooriya blaming him for ruing her honor, he wants to meet her immediately but his wise friend takes him to his house instead of taking her to Hooriya’s place. Asfand is feeling anxious he wants to clear himself in front of Hooriya as soon as possible and for that, he tries to call her which Namal picks, Namal snubs Asfand for disgracing their honor and warns him not to call at their number again as she will not let him talk with Hooriya but Asfand warns her in return that they all have to face the trouble if she will not let him talk with Hooriya. It seems that Namal will use this threat of Asfand against him. The episode end when Asfand enters into Hooriya’s room making us wonder is it reality or Hooriya’s hallucination?

tweet
Share on FacebookShare on TwitterShare on PinterestShare on Reddit
Rameeza NasimOctober 16, 2020
the authorRameeza Nasim
Rameeza Nasim, a Paralian, passionate about poetry, drama and fiction. By giving drama critiques I feel like I am endorsing the writer's message to the audiences, I love my job. Being a critic responsibility lies on my shoulders to point out the flaws and shortcomings of the play be it on writer's , performers or director's end . I did my Masters in English Literature and Linguistics .
All posts byRameeza Nasim