Sinf e Aahan Episode-13 Review: Mahjabeen gets a tough time as all girls pass salute test, except her 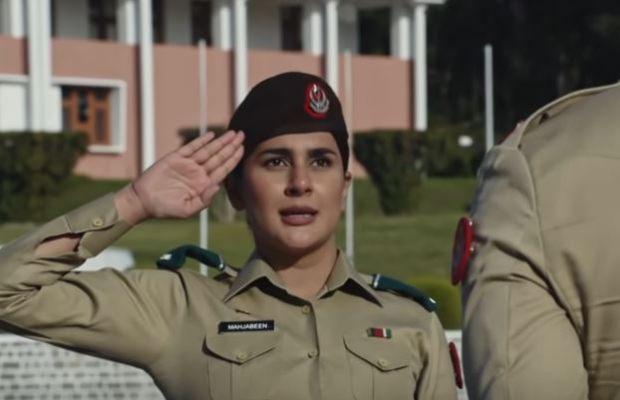 ISPR production and ARY Digital’s Sinf e Aahan is a kind of a breath of fresh air among all the typical toxic plays in running. The ensemble cast has given incredible performances. In the previous episode, Arzoo and Pariwesh were writing inspirational letters to their parents. In this episode, except for Mahjabeen, all the girls have passed their Salute test and they went home to enjoy their semester break.

In this episode, we get to know more of PMA’s traditions and exercises. The first round is of uniform inspection. The senior has very strictly scrutinized the uniform of all the girls giving them remarks, either passing them or failing them. Parwesh, Arzoo, Mahjabeen, and Rabia pass this test other were failed on either having loose belts or short or long trousers.

The second round is tougher it is the ultimate Salute round, the salute which girls are practicing for weeks. We have seen the Salute display of all LCs and the one I liked the most is by Shaista she has the perfect military vibes and confidence. All girls pass this test except LC Mahjabeen. Mahjabeen gets very poor remarks and senior calls her salute pathetic. Well, we really feel sorry for poor Mahjabeen.

Well after passing the salute test girls are going home for Semester break. Nathmy Perara has nowhere to go she has to live in the PMA, Rabia makes sure that she will not leave Nathmy alone she asked Major Samia to grant her permission to take Nathmy with her. Major Samia calls the Srilankan embassy and they get the permission. Rabia and Nathmy’s bond looks so cute. The scene where Rabia says” Embassy se ijazat mil jayegi” and Nathmy says “InshaAllah” on which Rabia says “wah tum tu Arabi b bolnay lagi ho”. Everyone is on the way home except LC Mahajabeen she has to stay and practice her salute.

Pariwesh and Arzoo have already displayed how PMA has transformed them. Arzoo is no more than a timid and shy girl who silently bears street harassment and catcalling. She gives that loafer a befitting lesson that he will never forget not to mess up with Arzoo again. Well, I believe that scene is overdone. Sardar’s character looks interesting in the way he is giving respect to Pariwesh and offers them a ride to their home. On the way, Pariwesh gathers the courage to ask her to give back their piece of land against the money she will get by her salary. Is Shaista blind? Why she is still persisting Kamal to break their engagement? This is too rude and cruel on her side. Kamal and Shahista make such a cute couple wishing they will stay together.

tweet
Share on FacebookShare on TwitterShare on PinterestShare on Reddit
Rameeza NasimFebruary 21, 2022
the authorRameeza Nasim
Rameeza Nasim, a Paralian, passionate about poetry, drama and fiction. By giving drama critiques I feel like I am endorsing the writer's message to the audiences, I love my job. Being a critic responsibility lies on my shoulders to point out the flaws and shortcomings of the play be it on writer's , performers or director's end . I did my Masters in English Literature and Linguistics .
All posts byRameeza Nasim