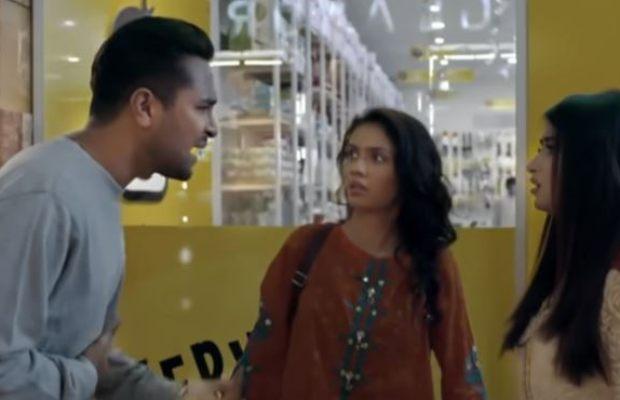 Sinf e Aahan the ISPR Production running at ARY Digital is getting stronger and this is the one serial we wait for the whole week. Performances are on spot. In the previous episode we have seen that except Mahajabeen all girls have passed the Salute test. In this episode, Mahajabeen finally clears her Salute test.

This episode truly belongs to Nathamy Perara and Rabia. Their bond looks so cute. The way Rabia takes Nathamy to Buddhist sites in Taxila is so cordial. Out of no where Rabia’s ex fiance emerges, stopping her way in the mall when Nathamy starts beating him thinking that he might be harassing Rabia and when Rabia stops her and tells her that he is her fiance she starts giving her a loose hug its such a cute scene.

Asim Azhar’s screen presence seems a bit underwhelming. Nathamy Perera is rooting for Nasar and Rabia’s union she wants them to patch up but Rabia is in no mood for giving her ex fiance a second chance. Rabia says that she does not want to relive that pain of breakup as her engagement broke up badly and she further tells that Mahajabeen has broken her engagement as Nasar is her cousin.

Mahajabeen after lot of practice eventually clears her Salute test although she does not get much appreciation except that she has improved in her Salute and she is criticized for her posture and uniform but she has been cleared in the test. Mahajabeen calls her parents and Mahajabeen surprises them by changing the tire of her car. Her new skill of tire changing has left her parents in shock. Shaista is back home, bantering her dadi all the time making her father smile. Dadi asks her that has she learnt cooking too Shaista replies that no she will get batman.

Arzoo has won our hearts by doing exactly what she must have done way back with Nauraiz. She is giving him a cold shoulder. She rudely talks with him on phone telling him that he no longer exist in her world and planning. Nauraiz is giving her importance when she has become a cadet and now he tells her that he has talked with his parents. Arzoo shocks him by telling him that she does not want to marry him. This is the response Nauraiz has never imagined by Arzoo he is shocked. Well Nauraiz truly deserves this kind of treatment Arzoo has given him. It is so satisfying to watch this. Nauraiz is gaslighting her all the time and now she has shown him the mirror.

tweet
Share on FacebookShare on TwitterShare on PinterestShare on Reddit
Rameeza NasimFebruary 28, 2022
the authorRameeza Nasim
Rameeza Nasim, a Paralian, passionate about poetry, drama and fiction. By giving drama critiques I feel like I am endorsing the writer's message to the audiences, I love my job. Being a critic responsibility lies on my shoulders to point out the flaws and shortcomings of the play be it on writer's , performers or director's end . I did my Masters in English Literature and Linguistics .
All posts byRameeza Nasim