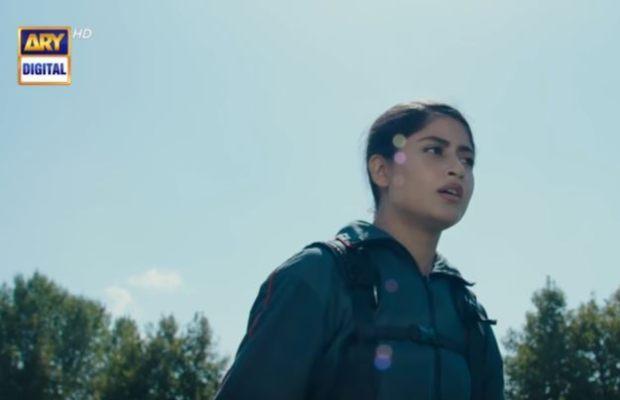 Sinf e Aahan the ISPR drama serial airing at ARY Digital is purely women-centric and extremely progressive yet so refreshing and entertaining. Performances by the ensemble cast are simply mind-blowing. In the previous episode, we have seen that the girls are back to PMA. In the latest, LC Rabia along with LC Arzoo, Sidra, and Nathmy Perera, defeats her height phobia by attempting smooth paragliding in her adventure trip.

The adventure trip goes really smooth and girls particularly Rabia just nailed it with her courage and bravery she has eventually defeated the biggest phobia of her life as she had been scared of heights. The scenes where Rabia is shown paragliding are simply brilliant. All the girls went back to PMA extremely happy from the adventure trip and LC Rabia is flaunting her success and teasing Mahjabeen.

It seems like new trouble is coming towards Arzoo as Nauroz is blackmailing her by spreading her personal photos in the neighborhood. Arzoo’s sister reveals that to her when she calls home to share her successful paragliding. Upon comforting Nauroz, it is obvious that he wants to take revenge on Arzoo for rejecting him and threatening what PMA will do of such a girl.

The best part of Sinf e Ahan is that it is not just about the LCs at PMA, it is also about the women of steel associated with our Pakistan Army be it acting officer Major Saima’s struggles of balancing with her professional and personal life or be it pains and sacrifices of a Shaheed’s wife and mother. The subtle messaging within the play is so brilliantly done and the credit for that goes to the writer Umaira Ahmed for bringing up such a progressive narrative.

The dialogues between Taimoor’s mother and Kiran are so heart-touching, it makes us realize the sacrifices and the pain the families of Shaheed go through, it is because of those brave hearts who have sacrificed their tomorrows for us so that we could breathe in a safe and protected air. It is the sacrifices of those Women of Steel, wives of martyrs, and mothers that ensure the safety of our Nation’s women. These are the women of steel associated with Pakistan’s strongest institution and this is the very spirit we need in each woman outside the realm of the army.

Kamil’s breaking his engagement with Shaista is so saddening but it is making Kamil a gem of a heart kind of person who refuses to marry a girl giving the reason that she is too good for him. Musa’s silence is disturbing can’t he see that he is such a progressive person making a school for girls what if he is not holding any higher degree? He can keep Shaista happy. Shaista and her family have disappointed us.

LC Mahajabeen during her firing exercise loses a part of her riffle on which she gets snubbed by Major Samia she has given tasks for all girls to find that part otherwise she is going to expel Mahajabeen. LC Rabia finds that part and she has the chance to take her revenge but she thinks greater. Hope this act will become a bridge between the friends and their hearts will melt for each other.

tweet
Share on FacebookShare on TwitterShare on PinterestShare on Reddit
Rameeza NasimMarch 22, 2022
the authorRameeza Nasim
Rameeza Nasim, a Paralian, passionate about poetry, drama and fiction. By giving drama critiques I feel like I am endorsing the writer's message to the audiences, I love my job. Being a critic responsibility lies on my shoulders to point out the flaws and shortcomings of the play be it on writer's , performers or director's end . I did my Masters in English Literature and Linguistics .
All posts byRameeza Nasim