Shaista is having second thoughts for Kamil 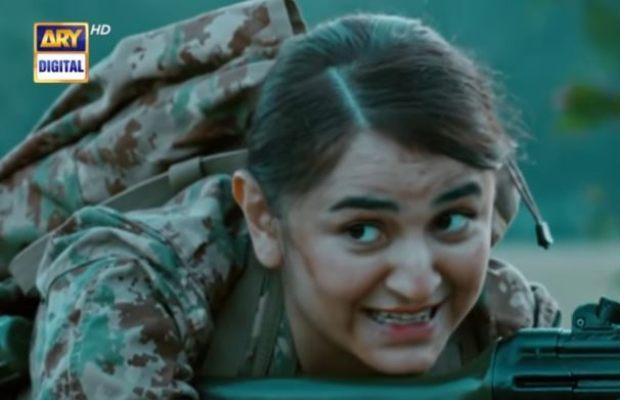 ISPR production Sinf e Aahan is our favorite refreshing primetime watch at ARY Digital.  Besides military life, the characters and their stories are what make this play very engaging. Performances are top-notch. In the previous episode, we have seen that Rabia has defeated his biggest phobia in the adventure trip. In this episode, we see how passionately Shaista outshines Nathmy and others in the test.

The scene begins with a real treat with the military training test in which Shaista is resolute that she will not let Nathmy Perera win this test just because she wants to elevate the name of Pakistan in front of a Srilankan. Shaista passionately puts all her efforts and she outshines Nathmy. Shaista delivers her famous cute dialogue ” Pakistaniyo khas kar k Pathano ko kabhi easy nahi laina chahiye”.

Shaista is being ecstatic about her performance when her sister tells her that she has another good news Kamil has himself broken his engagement with her. Shaista gets shocked how come Kamil has taken such a big step. She is definitely having second thoughts about Kamil and she is not happy. LC Sidra’s scenes are super cute in this episode.

Arzoo is bottling up her anxieties and worries instead of sharing them with her course mates her silence is annoying us. Arzoo needs to be vocal and she needs to share this with her senior which eventually she does in the end. Nauraiz is definitely going to learn a lesson not to mess with lady cadets. We get to see more of Rabia and Mahajabeen’s story and there Mahajabeen had done something awful on her part. We have seen a very grey side of Mahajabeen but then she has redeemed herself.

Well, Mahajabeen telling Nasar that Rabia has Bipolar disorder and Nasar breaking her engagement for that reason makes us question what kind of a hero he is? Besides that, I do not like this narrative as this is a very insensitive sort of messaging and it’s being a disservice to the cause of mental health awareness in a society where already it is considered taboo. What if Rabia is actually Bipolar does it makes someone abandon her? This is very insensitive on part of writing and now since when Nasar has got the clarification that Rabia is not bipolar so he is thinking about her.

tweet
Share on FacebookShare on TwitterShare on PinterestShare on Reddit
Rameeza NasimMarch 28, 2022
the authorRameeza Nasim
Rameeza Nasim, a Paralian, passionate about poetry, drama and fiction. By giving drama critiques I feel like I am endorsing the writer's message to the audiences, I love my job. Being a critic responsibility lies on my shoulders to point out the flaws and shortcomings of the play be it on writer's , performers or director's end . I did my Masters in English Literature and Linguistics .
All posts byRameeza Nasim