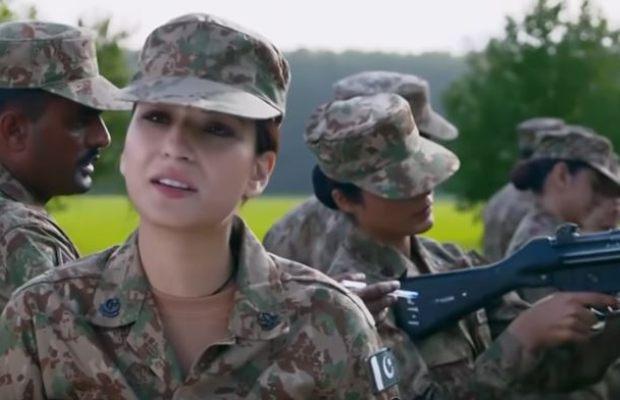 Sinf e Aahan the ISPR Production airing on ARY Digital is the best and most refreshing serial in the running, amongst the regressive and toxic drama serials Sinf e Aahan is a real treat for which we wait for the whole week. Performances are top-notch. In the previous episode, LC Shaista shines out in the test. This episode ends up on a suspense note will Pariwesh be able to defeat Sardar’s son in the shooting competition?

The episode begins with LC Rabia and LC Mahajabeen’s scene where Rabia has not accepted Mahajabeen’s apology she says that she will not forgive and forget what she has done to her. Then we have seen Arzoo mustering the courage to face Major Samia and she tells her that she wants to leave PMA as she does not want to disgrace PMA.

Major Samia shares the whole situation with Major Osama who assures Arzoo that she has PMA’s back now and there is always a solution. Well, Arzoo very smartly calls Nauraiz to PMA, and there she traps him and demands him her pictures from his mobile. Nauraiz displays his ugly self and tries to threaten her but then Major Osama intervenes and he teaches him a lesson that he will not forget.

All eyes and hopes of LCs are with Pariwesh, she has to win to make herself the first lady cadet ever to win this competition. Pariwesh is really very conscious of the fact that she has to win at any cost-plus she knows that it is very difficult to beat the men cadets, particularly Sardar’s son. Sardar’s son on the other hand seems extremely confident that no one can beat him in this competition. We are rooting for our lady cadet Pariwesh and want her to win. The question is will Pariwesh be able to defeat Sardar’s son in this shooting competition?

tweet
Share on FacebookShare on TwitterShare on PinterestShare on Reddit
Rameeza NasimApril 4, 2022
the authorRameeza Nasim
Rameeza Nasim, a Paralian, passionate about poetry, drama and fiction. By giving drama critiques I feel like I am endorsing the writer's message to the audiences, I love my job. Being a critic responsibility lies on my shoulders to point out the flaws and shortcomings of the play be it on writer's , performers or director's end . I did my Masters in English Literature and Linguistics .
All posts byRameeza Nasim