We see a glimpse of Sunheray Din in this episode 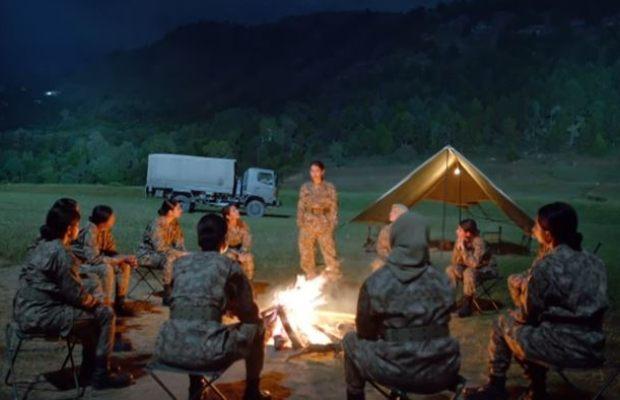 ISPR Production Sinf e Aahan airing on ARY Digital is one refreshing and feel-good serial with strong and inspiring characters but overall the main story seems weak, it has loopholes, for instance, Rabia and Mahajabeen’s track does not seem much convincing. In the previous episode, Arzoo saves Nathmy Perera. In this episode, LCs are awarded gold medals in the area of their respective expertise. Well passing out parade is nigh and so is the conclusion of this play.

There is a farewell sort of Bon Fire where Nathmy Perera suggests the LCs play a game they used to play where they burn in fire all their fears and appreciate their achievements. Nathemy starts this game by sharing her own story of how she has overcome her childhood trauma. Arzoo’s part is inspiring too but it gives such an inkling that lower-middle-class minorities are not treated well in our country.

Syeda Sidra’s part is too cute where she shares how pampered she is at home but PMA Teaching has taught her that these Wazifas and Dua will only work when one makes a physical effort for that as well. Mahajabeen’s part is also very motivational and inspiring how her perception of brands defining life transformed towards patriotism.

Then there is a prize distribution ceremony at PMA where all leading LCs bagged gold medals in the respective field of their expertise. Poor Syed Sidra has not gotten any medal and the way she is expressing her desire to have one is super cute. The scene where she is telling everyone that ” you are my favorite tum ko b bohat miss karoongi looks too cute. Nathmy Perera and Arzoo singing that Dosti song is also very refreshing. Arzoo has really transformed into a strong person and so is Rabia she has defeated all her phobias. We see a glimpse of Sunheray Din that famous scene of Safeer in the dining hall.

Well, Rabia and Mahajabeen and that Nasar story track does not seem much convincing. We have seen more of their backstory in this episode where Nasar has actually seen Rabia somewhere and he has gotten infatuated by her and then his mother coincidentally suggests her in the list of the girls she has sorted for him. Well, I really do not like the way the girls’ pictures have been shown the way he is rejecting their picture seems very insensitive. The girls’ pictures should not have been shown on screen. To be honest I really feel that the bipolar issue is also very carelessly and insensitive dealt with in this play. Nasar is not a hero if he rejects the girl who he has fallen for just on the basis that she might have bipolar?

tweet
Share on FacebookShare on TwitterShare on PinterestShare on Reddit
Rameeza NasimApril 25, 2022
the authorRameeza Nasim
Rameeza Nasim, a Paralian, passionate about poetry, drama and fiction. By giving drama critiques I feel like I am endorsing the writer's message to the audiences, I love my job. Being a critic responsibility lies on my shoulders to point out the flaws and shortcomings of the play be it on writer's , performers or director's end . I did my Masters in English Literature and Linguistics .
All posts byRameeza Nasim