Rabia leads the platoon and bags sword of honor 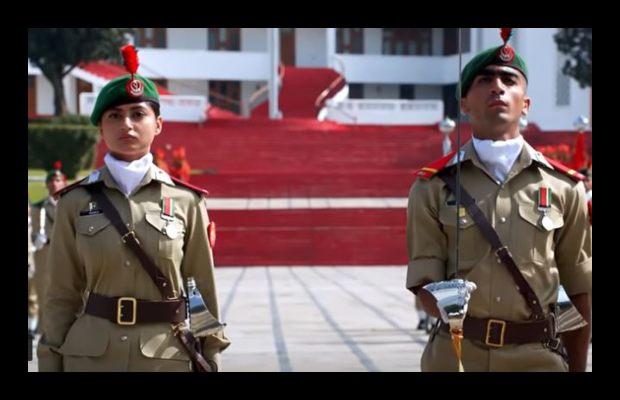 Sinf e Aahan the ISPR production airing on ARY Digital has finally come to its conclusion and it is already making us sad as we really going miss this refreshing, feel good serial. Our Saturdays will never be same. Performances by the ensemble cast are simply brilliant so is the writing and direction everything is equally good. Umaira Ahmed has beautifully penned down this serial and Nadeem Baig’s execution has added life and value to the serial. In this episode we have seen passing out parade of the girls.

The episode begins when the girls are all set for their passing out when a breaking news changes the whole air and it has put LC Rabia’s life upside down. The news is of Captain Daniyal’s severe injury in a suicidal attack. Rabia is passing through a turmoil where at one hand her heart goes out for her brother and on the other hand she has to lead the platoon the next day.

Major Osama and Major Samia have decided that they will give the lead to LC Mahajbeen. Mahajabeen goes straight to LC Rabia and there both the girls embrace each other crying their hearts out. Mahajabeen is successful in clearing the air of hatred and she strengthen her bond with Rabia offering her to lead as according to her it is her earned position and she deserves it the best. Mahajabeen encourages Rabia bucking her up for leading the platoon.

The passing out parade is one over whelming scene making us all swell with pride. We have been through the journey of all the girls so it is making us feel proud to see them passing out as strong and courageous cadets. LC Rabia leads the platoon and she also bags the sword of honor. This episode particularly belongs to LC Rabia, her struggle to balance and compose herself as the one who is battling with the fear and anxiety of losing her brother and on the other she is so in control that she perfectly leading the platoon. This is the true spirit of a soldier. Sajal Aly has just nailed her character.

We also love to see Cadet Sabuk in the passing out parade but there is no sign of him. All the girls shine out in the parade making their families and communities proud. Well there is certainly an element of over glorification as no one welcomes just a passing out cadet with such a warm welcome I mean they are just passed outs not war heroes. Srilankan girl looks so cute in the airport scene. Syeda Sidra is also super cute. Sajal Aly, Yumna Zaidi, Kubra Khan, Ramsha Khan, Syra Yousuf have given their best. The ending scene of Major Osama and his wife is also very heart touching with a powerful message. Kudos to team Sinf e Aahan for bringing such a classy play and reminding us not to forget those who have sacrificed their today for our tomorrow.

tweet
Share on FacebookShare on TwitterShare on PinterestShare on Reddit
Rameeza NasimMay 9, 2022
the authorRameeza Nasim
Rameeza Nasim, a Paralian, passionate about poetry, drama and fiction. By giving drama critiques I feel like I am endorsing the writer's message to the audiences, I love my job. Being a critic responsibility lies on my shoulders to point out the flaws and shortcomings of the play be it on writer's , performers or director's end . I did my Masters in English Literature and Linguistics .
All posts byRameeza Nasim