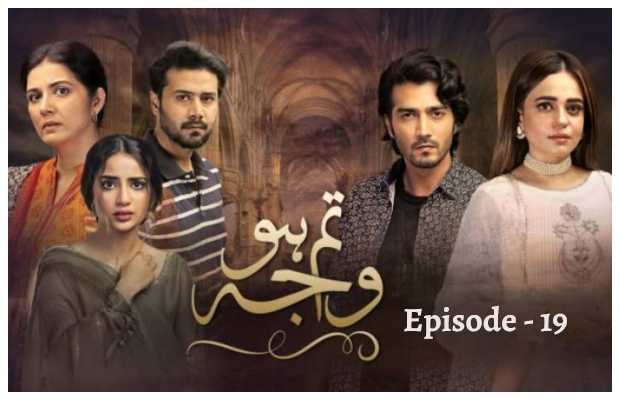 HUM TV’s drama serial Tum Ho Wajah has aired its another episode, the theme of the play revolves around shifting the blame on others, as the title of the play suggests. The major development of the story in this episode is that Wajid Sahab is after Sitara and she is refusing all his advancements even Danish is with her, supporting her. Shahab is ready to leave Chanda and he has made up his mind that he is going to marry Sana just because he wants to hurt Chanda. Performances are on point.

Wajid Sahab is clearly after Sitara, he inappropriately touches Sitara’s hand when she is serving tea but then after that when everyone is occupied somewhere he tries to harass Sitara more but then Danish intervenes and saves her. Wajid Sahab leaves the place immediately without informing anyone, making Babar worried that what actually happened? Wajid Sahab has made up his mind that he will eventually get Sitara, for him now she is a matter of his ego.

Danish is all set to go to Dubai but before leaving he tells his father to talk with Tayee Jan for Sitara and his marriage, this makes his father surprised but then he is ready to talk with Stara’s mother as he has no issue. Babar along with his wife goes at Wajid Sahab’s office to talk with him, Wajid Sahab is fearing that Sitara might have discussed with him but he is relieved when he gets to know that Babar knows nothing, he makes an excuse that he has got an important call so he has to leave without informing. Furthermore, he offers Baber to take his car and he can go for shopping.

Chanda’s in-laws lock her up in a room and they welcome Sana and her father but their whole meeting gets spoiled when Shahab enters into the drawing-room drunk and he is seeing Sana as Chanda and he under the influence of alcohol starts yelling at Sana thinking her as Chanda and he once again starts blaming Chanda for killing their child.

Sana’s father is pissed off with this whole scene but Sana still wants to give Shahab a chance, Sana seems an old lover of Shahab who is heartbroken when he refuses to marry her. Shahab is taking the least interest in her till the moment Chanda enters into the room claiming herself as his wife. Shahab denounces that she is not his wife. Furthermore, he says that he will leave her and he is going to marry Sana.

Sana who seems to be so void of self-respect and shame challenges Chanda that she will marry Shahab in a more dignified manner than her, but Chanda still thinks that Shabby passionately loves her and he cannot marry anyone. Is Shahab really going to marry Sana?

tweet
Share on FacebookShare on TwitterShare on PinterestShare on Reddit
Rameeza NasimSeptember 14, 2020
the authorRameeza Nasim
Rameeza Nasim, a Paralian, passionate about poetry, drama and fiction. By giving drama critiques I feel like I am endorsing the writer's message to the audiences, I love my job. Being a critic responsibility lies on my shoulders to point out the flaws and shortcomings of the play be it on writer's , performers or director's end . I did my Masters in English Literature and Linguistics .
All posts byRameeza Nasim