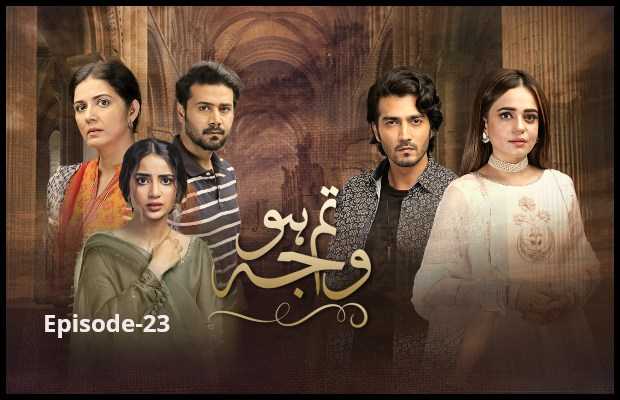 The drama serial Tum Ho Wajah airing at HUM TV comes up with its another episode. Some shocking developments occur in the story, the family is shown in epic misery, Babar is in police custody, Sitara’s mother is hospitalized in serious condition. Wajid Sahab wants to marry Sitara and Chachu by trick makes Sitara signs on Nikkah papers. Performances are great.

Well, what we are speculating is true that Wajid Sahab has bad intentions, he is eyeing on Sitara. We have already seen him harassing Sitara numerous times but this time he takes advantage of their misery and tells Chachu that he will help Babar to get out of this mess and will bear all the costs if he (Chachu) assures him that he will does his nikkah with Sitara.

Chachu is shocked when he hears Sitara’s name from him, he expresses his concern too that she is too young for him but then Wajid Sahab blinds him with his greed, he offers Chachu that he will give him money and also he will make him own Sitara’s house as he already has house papers. Chachu gets carried away with greed and he promises Wajid Sahab that he will help him in marrying Sitara.

Well in our plays there is always shown the height of miseries, and Sitara’s family’s miseries seem never-ending. Babar is in Police custody and he is stuck in a huge mess. Chachu is calculating his words and mustering courage how to utter what Wajid Sahab has said to him in front of Sitara when he hears Sitara shouting as her mother gets fainted. She is in serious condition and she is hospitalized. On the other hand, Shahab marries Sana, poor Chanda could not do anything but he ruins the wedding bed and floral setting of the room. Well, one still wonders why Shahab’s parents are still bearing her? Chanda also gets to know that her mother has no role in her miseries she has been wrongly blaming her mother all the time. She goes to her house but founds it locked.

Wajid Sahab is such an evil person that he says that it is good that Sitara’s mother is in the hospital she will soon die and then it will be easy for him to marry Sitara. Chachu is so cunning and evil that he by trick makes Sitara sign-on Nikkah papers. He asks him to sign on papers where she is supposedly requesting money from an organization for her mother’s treatment but in real Chachu is doing drama he has hidden those papers in the file and poor Sitara has signed on the Nikkah Papers. Will Danish be able to save Sitara from Wajid Sahab?

tweet
Share on FacebookShare on TwitterShare on PinterestShare on Reddit
Rameeza NasimOctober 12, 2020
the authorRameeza Nasim
Rameeza Nasim, a Paralian, passionate about poetry, drama and fiction. By giving drama critiques I feel like I am endorsing the writer's message to the audiences, I love my job. Being a critic responsibility lies on my shoulders to point out the flaws and shortcomings of the play be it on writer's , performers or director's end . I did my Masters in English Literature and Linguistics .
All posts byRameeza Nasim