At last! Happiness for Aleena! Or will she again be disappointed? 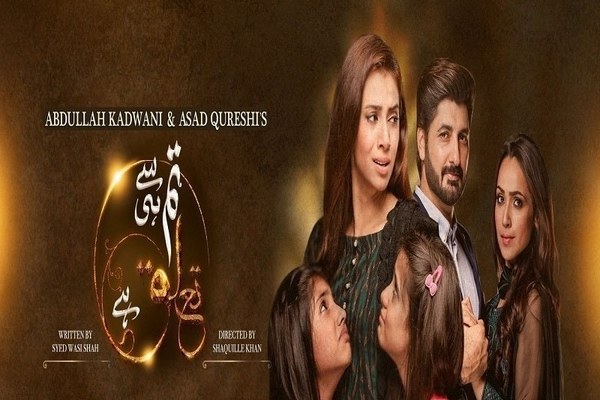 Tum Se Hi Taluq Hai has been presented to us by 7th Sky Entertainment production. That means an Abdullah Kadwani and Asad Qureshi’s project, which is guaranteed to tantalize our emotions. It has been penned by the creative Wasi Shah while Shaqielle Khan’s direction has given it the energy to keep us glued to our seats.

Sadaan has been played by Syed Jibraan, Aleena by Tooba Siddiqui, Rama by Faryal Mehmood and Nakheel by Ali Abbas. The storyline is simple- two cousins, Sadaan and Aleena are forcibly married against Sadaan’s wishes and he never reconciles himself to the marriage, divorcing Aleena and getting married to his love interest, Rama, who is in turn a cunning and clever lady wrapped in a pretty face. Aleena meanwhile drifts away for security towards her cousin Nakheel whose wife has recently died.

The 15th episode aired on Monday night. Despite the slow progression of the storyline, we were caught up in the suspense of guesswork- Sadaan has been presented with a large tax payment and in a fit of desperation on his lawyer’s advice he transfers quite a bit of property to Rama who is ecstatic and shares the event with her boyfriend whom she meets on the sly. He coaxes her to get the documents on which she signed, which she gets to prove to him that they were indeed authentic. We can see the wheels spinning in the boyfriend’s head as he now turns greedy and starts praising Rama’s looks to which she is coquettishly happy. Just wait for your turn Rama, after all, we reap what we sow and you better remember that!

Meanwhile, Aleena has found a job and is genuinely happy. Sadaan cannot digest this fact and calls her on little pretexts to taunt and goad her about her relationship with Nakheel, clouding her well-settled life. However, living alone is not a wise decision for a single woman as Aleena soon finds out when someone tries to break into her house, knowing she lives alone with her daughter. In desperation she calls Nakheel who takes her to his own house. Watching the suspenseful scene, I was almost on edge with a dry throat and wildly beating heart whether the intruder will get into Aleena’s room and harm her but heaved a sigh of relief when he couldn’t. The scene not only scared Aleena and Nimra, it scared us out of our wits too! But all is well when the end is well- we happily witness Aleena accepting Nakheel’s proposal of marriage and his happiness at being accepted. Sigh, Sigh…. I wish the episode didn’t have to stop right here- I wish I could watch the happy and joyful times to come in a single setting. But I am sure, the next episode will be well worth the wait. But it is still six long days far… sigh again!