Newly started drama Ye Dil Mera on airs its second episode, drama seems to be a promising thriller. Based on Farhat Ishtiaq’s novel Ye Dil Mera, the story revolves around two main characters Amaan and Noor, both seem to have troubled minds. The roles beautifully played by Ahad Raza Mir and Sajal Aly are making the play even more memorable, the play is surely a treat for all Ahad and Sajal fans as they are back after Yaqeen Ka Safar as an onscreen pair.

The episode begins when Amaan is playing piano and he has absolutely indulged in that activity when a servant comes in and asks him about the dinner, he gets mad and scolds him very badly that why he has dared to enter this room when he sees that he is in. There are altered expressions on his face, disturbance, and sadness. There are tears too in his eyes, he is keeping something deep into his heart and also he has a past which is not very pleasant.

Noor’s father is leaving for Singapore for his meeting and that night Noor has a nightmare. The same scene that we have seen in the first episode starting that a girl is running with a woman in the middle of the night on a deserted place probably a railway station and someone is following them and it ends on the voice of a fire and then blood. Noor screams the hell out of her lungs and she is extremely disturbed. Her father immediately returns cancelling all his meetings.

Noor’s father himself seems a dark character, the way he is behaving with the psychiatrist is not reasonable plus his facial expressions making him even eviler. He is not ready to accept that his daughter has some mental illness or problem. His behavior is quite common, most of the parents react similarly and it also reflects the common thought or concept prevailing in our society that only mad people or psychotics visit psychiatrists.

Amaan and Ghouri are good friends and Ghouri is also Noor’s father’s friend. Noor’s father takes her with him to the golf club where she again meets Amaan but unlike the university here Amaan recognizes her. She asks Amaan that how come he knows her, she has short hair in her childhood and nobody knows about her chin scar but how come he knows it so well. Instead of replying to her questions he says that she should not hide that scar it looks good on her but when Noor says that it is not the reply of her question he says he will reply to it in their next meeting. 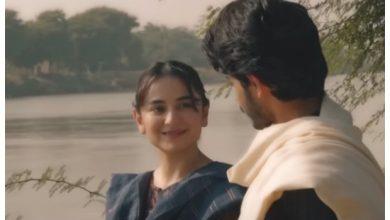