Apparently the get together took place on Sunday, a little before the show went on air 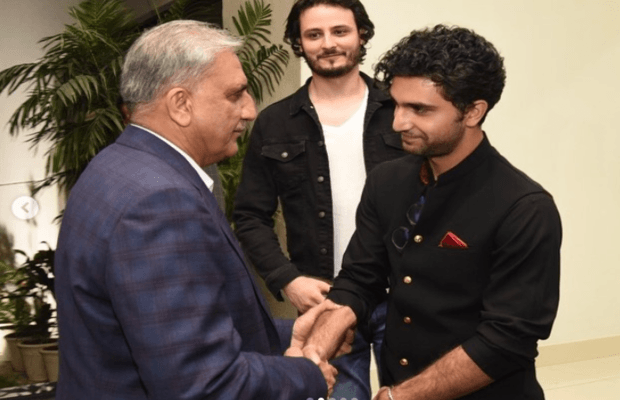 As you might have gotten to know by now, if God forbid you aren’t living under a stone, that the very hyped and talked about drama Ehd-e-Wafa is a joint production of Hum TV and Inter-Services Public Relations (ISPR). The two collaborated on the project and the whole gig was carried out quite under tight wraps.

So there’s obviously public interest in the drama and our hunch is that the cast must be pretty amped up too about the whole thing.

To add to everyone’s interest, the cast and main team of Ehd-e-Wafa met with Chief of Army Staff General Qamar Javed Bajwa and his aides over the weekend.

Taking it to Twitter, the DG ISPR Asif Ghafoor shared snaps of the event.

The people meeting the senior Army officials included Ahad Raza Mir, Osman Khalid Butt, Ahmed Ali Akbar, Wahaj Ali, Vaneezah Ahmed, Zara Noor Abbas, and director Saifi Hassan. Of course, anybody else who’s not in the picture must be missing from our list.

So what are your thoughts over this one and first of its kind meeting between the star cast and COAS?