#KoKoKorina has been trending but for other reasons. 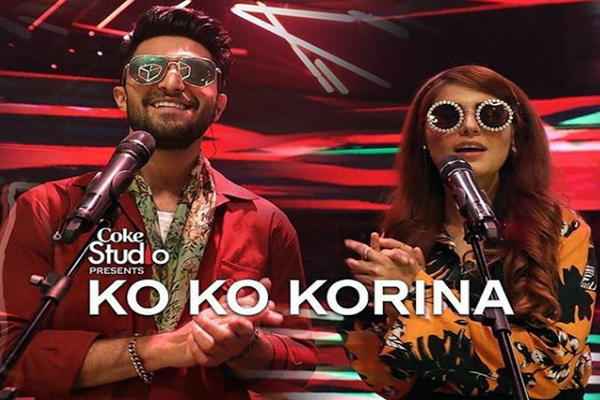 It was a day ago, Coke Studio season 11 released its last episode. It featured the rendition of iconic classic Ko Ko Korina sung by Ahad Raza Mir and Momina Mustehsan. This also marked the debut the famous actor Ahad Raza Mir as a singer.

Ko Ko Korina was originally sung by the iconic Pakistani singer Ahmed Rushdi for the film Armaan in 1966. Song featured the Pakistani chocolate hero Waheed Murad dancing on Ko Ko Korina’s tune. The song is ruling the hearts of Pakistani film and music fans for more than 50 years. And generations have danced and sing this classic number making it something closer to their hearts.

Coke Studio is known for the recreations and renditions of many hit songs of the past. Few of such experiments have been massive hits. But this time it seems that people are not happy about this recent experiment. There has been a massive response on twitter about this Momina and Ahad’s rendition of Ko Ko Korina. Check out for yourself.

Coke Studio should be renamed as
Poke Studio #KoKoKorina

Am done with remakes and remixes … back to watching the original #MagnumPI, #MacGyver and listening to the original #Kokokorina. The world may be ready to accept the new versions but not me. In love with original stuff, only!

"Let's remake all the classics and ruin them in all possible ways" #KoKoKorina pic.twitter.com/Vwso8ocpjt

I get it you are a super crazy blind fan of Ahad Raza Mir but at least admit the fact the song is a big FLOP.
The only thing worst than the song was the faces he was making while singing it. #CokeStudio11#kokokorina

This year's Coke Studio is so half hearted and without soul.
Ko Ko Korina could've been done better than this by a local band, believe me. These songs that Coke Studio has been reviving over the past decade have always been a delight.. (1/2)#CokeStudio11 #KoKoKorina

tweet
Share on FacebookShare on TwitterShare on PinterestShare on Reddit
Saman SiddiquiOctober 21, 2018
the authorSaman Siddiqui
Saman Siddiqui, A freelance journalist with a Master’s Degree in Mass Communication and MS in Peace and Conflict Studies. Associated with the media industry since 2006. Experience in various capacities including Program Host, Researcher, News Producer, Documentary Making, Voice Over, Content Writing Copy Editing, and Blogging, and currently associated with OyeYeah since 2018, working as an Editor.
All posts bySaman Siddiqui