It was earlier in May when Anoushey revealed that she missed a  surprise video call from Ertugrul Ghazi star Engin Altan Duzyatan on Eid.

Anoushey Ashraf has been all praises for the international hit Turkish series ‘Dirlis Ertuğrul’ after its Guinness World Record.

The famous Turkish drama serial has not just won popularity in Pakistan but throughout the world. As being reported the series has reached 3 billion views and translated into 39 languages, earning it a spot in the Guinness Book of World Records as the best dramatic work to date.

The news caught the attention Pakistan’s top VJ Anoushey Ashraf and she took to social media replying to the news post.

“Super well made! amazing depiction, story telling, camera work, and acting that promotes work on from this side of the world on an international level,” she wrote on the Instagram post.

“Cinemas/art brings us so much closer to everyone. May we get to see more Turkish, Iranian, Lebanese, and even work from Egypt in the coming years and May we export our best stuff there!” she further added. 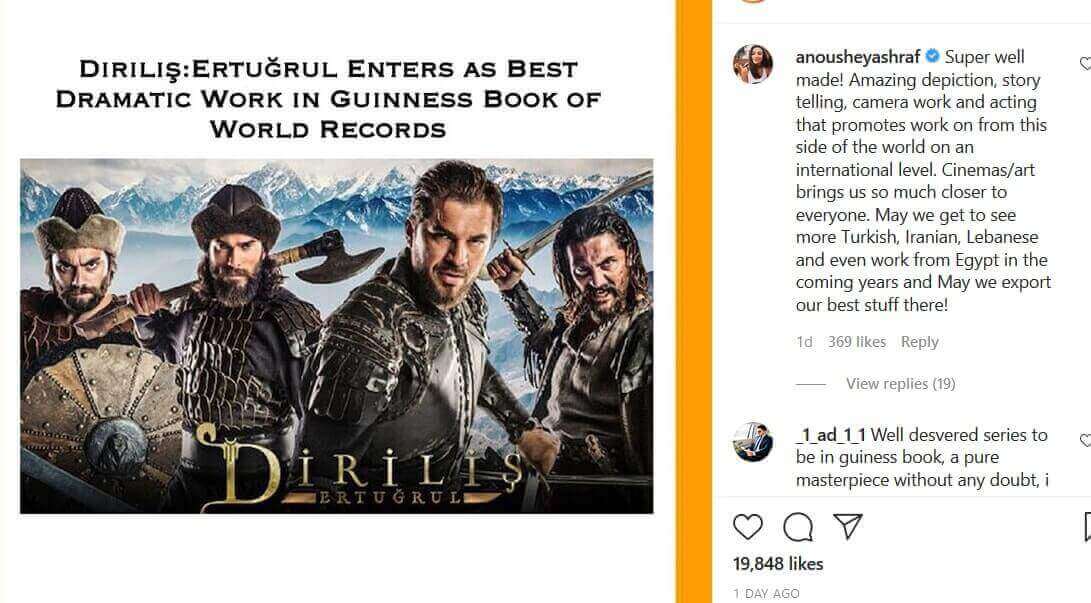 It was earlier in May when Anoushey revealed that she missed a  surprise video call from Ertugrul Ghazi star Engin Altan Duzyatan on Eid.

tweet
Share on FacebookShare on TwitterShare on PinterestShare on Reddit
Saman SiddiquiSeptember 30, 2020
the authorSaman Siddiqui
Saman Siddiqui, A freelance journalist with a Master’s Degree in Mass Communication and MS in Peace and Conflict Studies. Associated with the media industry since 2006. Experience in various capacities including Program Host, Researcher, News Producer, Documentary Making, Voice Over, Content Writing Copy Editing, and Blogging, and currently associated with OyeYeah since 2018, working as an Editor.
All posts bySaman Siddiqui