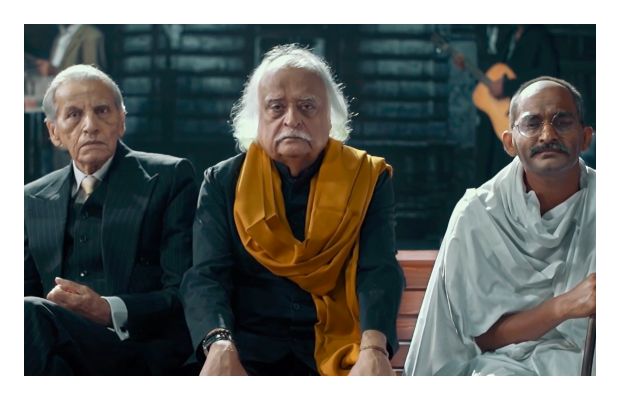 Esteemed scriptwriter, television presenter, humorist, and actor Anwar Maqsood’s iconic 14th August play trilogy is all set to launch its final leg as the series concludes with its last epic performance. Celebrating the 75th Anniversary of Pakistan with the final part of the theatrical masterpiece trilogy, KopyKats Productions and Anwar Maqsood’s ‘Saadhay 14 August’ premieres in Karachi on 14th August 2022. The play is directed by Dawar Mehmood and will be staged at the Arts Council of Pakistan in the city of lights.

The plot of the live-action performance revolves around 2 characters Jinnah and Gandhi who get the people’s views on the great divide between Pakistan and India. Jinnah and Gandhi visit 4 places (Kashmir, Lahore, Delhi, and London) to gather people’s reactions and fight a case against the allegations of whether the divide was a good decision or not. In the past, Jinnah and Gandhi never wanted a divide but simply desired freedom from the British. The two leaders agreed on the Muslim Govt in Muslim majority regions, but Nehru didn’t agree and eventually, the solution was a sub-continent divide into 2 countries, India and Pakistan.

The official promo teaser was released on the 16th of July 2022, and the storyline already holds promise. Set in a time long ago, the clip reveals the two superpower leaders Jinnah and Gandhi who share a bench and bicker about the gap between them while a cameraman tries to navigate the perfect photograph of the two together. Eventually, Anwar Maqsood himself joins the frame and announces the launch of the play.

“In 2011, after the creation of Ponay 14 August, it was asked, ‘why not 14th August?’ I said we will announce it on 14th August, three years After we did Sawa 14 August, this is the last episode of this series,” stated Maqsood.

Talking about the story of the theater play, Anwar Maqsood said following the success of “Pony 14 August” and “Sawa 14 August” the last part of the 14 August trilogy focuses on the great divide between Hindustan and Pakistan.”

Speaking of the plays Dawar Mehmood stated, “Anwar Maqsood is the Legend of our country, adding, I learned a lot from him and we both hope to fulfill the expectations of the people.”

In 2011, Anwar Maqsood collaborated with Kopykats Productions for a very distinguished idea for a play to be released on 14th August, Pakistan’s independence day. The patriotic narrative was titled ‘Pawnay 14 August’ (A Quarter to 14th August). With a sharp wit, sarcasm, emotion, and elements of humor, the play became a huge hit and even toured around the world. A few years later. In 2013, the sequel to the first play was launched with the title, ‘Sawa 14 August’ (A Quarter After 14th August). More than a decade later, Maqsood has written the final part of the trilogy, which has now progressed to a ‘Saarhay 14 August ’ (fourteen and a half August). The play featured now acclaimed actors such as Zahid Ahmed, Yasir Hussain, Gohar Rasheed, and several other notable names. The plays earned nationwide success for their distinct ability to merge political commentary and satire in the most enlightening mannerisms.