So beware if you haven't watched the episodes yet, there are spoilers! 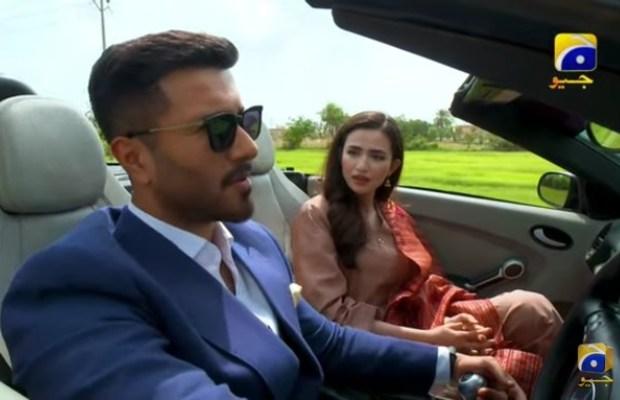 7th Sky Entertainment’s production at Geo Entertainment is 5 episodes down but before we bring the review of the episode, it’s the netizens who can’t hold their excitement.

The story of the much-anticipated drama has moved forward significantly, however, the latest episode 5’s content is what left the hashtag #AyeMushtEKhaak trending on the Twitter timeline.

So beware if you haven’t watched the episodes yet, there are tons of spoilers coming ahead!

People are loving the ongoing chemistry between their favourite stars Feroze Khan and Sana Javed, once gain united on-screen after Khaani.

Dua and Mustajab are officially husband and wife after families arrange for their nikkah but the significant differences in their upbringing will create a lot of trouble for both of them as the story unfolds.

And he didn't just apologised for the sake of getting her back, but actually felt guilty for hurting her, that's why even when he was apologising, he stick to his point & asked her to accept him by heart….which proves he not faking anything! #FerozeKhan #AyeMushtEKhaak https://t.co/7b4oz7nkGR

My head is still stuck with Mustajab's words
Must appreciate whole team for trying to express such sensitive yet important topic
Hatsoff to the writer,director,producers to bring this story
&actors for doing such characters&made them believable&natural#AyeMushtEKhaak #FerozeKhan pic.twitter.com/96kOnvEXen

Mustajab here!!
He feels Dua is more stubborn&self-obsessed than him!
&mark his word he is not a person who bows down his head to anyone!!!!#AyeMushtEKhaak #FerozeKhan pic.twitter.com/kTqQ5axPW6

As the story progress, Dua gets a reality check as her beloved has been astray without any knowledge of the religion despite being born in a Muslim Pakistani family.

This question from Dua
The clash between two opposite character
Mustajab and Dua are poles apart!
Mustajab's jouney started as non-believer
Will he gonna end his journey as a believer because of her?because of his love?
Interesting!#AyeMushtEKhaak #FerozeKhan #SanaJaved #SanRoze pic.twitter.com/Uqrmkyys2P

"Faith bhi kaisi chees hay na Dua
Insaan ko khud se batey karne me majboor kar deta hay"
Mustajab! who has no faith in fate as well as his creator!
How will be his journey towards his creator&how will he regain his belief!
Thats gonna be an intersting#AyeMushtEKhaak #FerozeKhan pic.twitter.com/F3pU2wEGtN

Mustajab showing his side of not believing in God has begun! Excited to see how it goes ahead.
Proud of #FerozeKhan for choosing a character which is so unlike him in real! Kudos to him🙌❤ #AyeMushtEKhaak pic.twitter.com/bhBvqPAxRa

Will these two be able to cling to each other in this new relationship with obvious differences?

Let’s wait for more episodes of Aye Musht e Khaak before making any conclusion about the story.

How would you rate this episode? give your rating in the box below!