Catch the episode on their YouTube channel to be inspired by this amazing story. 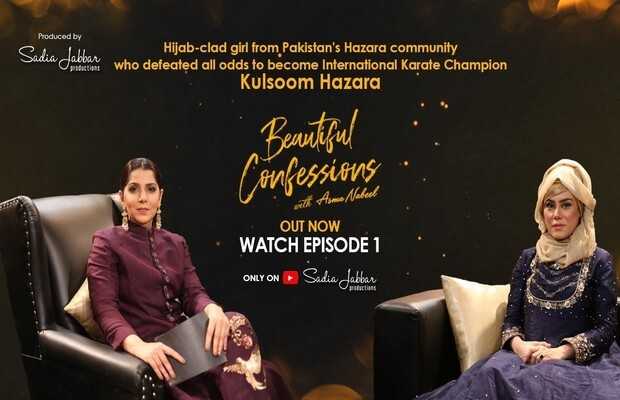 Famed for the revitalizing web-series “Shameless proposals” and some very famous television series like “Khuda Dekh Raha hai,” “ Mera Naam Yousuf hai,” and “Dil e Bereham”; Sadia Jabbar production has once again stepped up for an innovative concept of a digital talk show ‘Beautiful Confessions with Asma Nabeel.’ A show for women by women.

Ever since the teasers of the show came out on international women’s day, the show has become the talk of the town. The idea of supporting women in their journey of stepping out of the comfort zone is somewhat foreign for the desi mindsets. Still, for the first time on our digital screens, we will be able to hear the stories of all the power women we didn’t even know existed and about their journeys in becoming such aspiring personalities.

The show features Asma Nabeel, who is a famous screenwriter as well as a cancer survivor. The first episode of the show aired last night with a story of International karate champion, Kulsoom Hazara. Born in Quetta, Kulsoom Hazara comes from a family of women who strived through the societal norms to achieve her dreams. Kulsoom shares the heartbreaking story behind her accomplishments. Kulsoom lost her mother to cancer at the age of 2 and then her father at a very young age of 7. She was then raised under the supervision of her brother in law who was a father figure for her and finally also lost him in target killings in Quetta.

Kulsoom, along with her two elder sisters, moved to Karachi and carried on with her karate training while focusing on her academics side by side. Kulsoom was brought up by her two sisters. One does embroidery and the other teaching to make ends meet. They supported her passion for sports and motivated her to achieve her goals. Kulsoom being a hijabi, raised an essential note in terms of discrimination in the field of sports for hijabis. She feels that because of her Hijab she is not given the admiration she deserves internationally but, most importantly, also locally.

Kulsoom talks about how questions were raised when she decided to devote herself to this field coming from Hazara. She had to face a lot of problems with people pointing fingers at her character for attending camps for practices, but she didn’t let people come in between her goals.

Kulsoom is a solid example of breaking so many stereotypes all at once regarding what girls can and cannot do.

Asma Nabeel stresses upon the need of girls being independent for the sake of the betterment of the society she calls Kulsoom an example for independent and power figure for many young girls who tend to dream out of norms.

tweet
Share on FacebookShare on TwitterShare on PinterestShare on Reddit
Saman SiddiquiMarch 20, 2020
the authorSaman Siddiqui
Saman Siddiqui, A freelance journalist with a Master’s Degree in Mass Communication and MS in Peace and Conflict Studies. Associated with the media industry since 2006. Experience in various capacities including Program Host, Researcher, News Producer, Documentary Making, Voice Over, Content Writing Copy Editing, and Blogging, and currently associated with OyeYeah since 2018, working as an Editor.
All posts bySaman Siddiqui