The criticism was highlighted with the hashtag #RacismIsNotComedy, which led the company to apologize for the act. 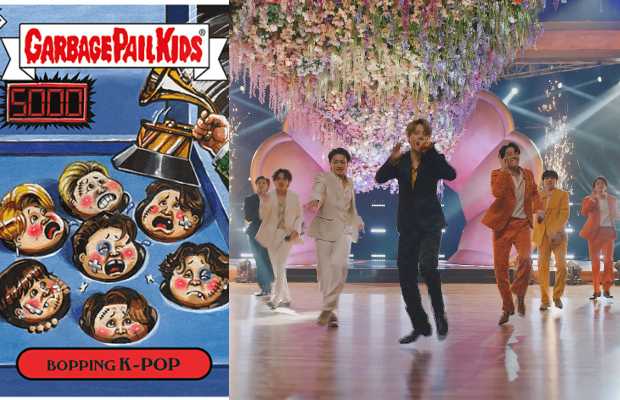 It all started as a US-based company named Topps shared a series called ‘Garbage Pail Kids.

The series of the card is part of the Garbage Pail Kids’ 2021 “Shammy Awards” GRAMMYs satire collection, depicts different characters’ suffering in some sort of way or being beaten.

The 2021 edition of ‘Garbage Pail Kids’ cards was based on the recent Grammy awards which were held on March 15.

The cartoon, among other celebrities, showed a caricature of BTS members being beaten physically by the Grammys award.

The collection included depictions of Grammy-nominated artists such as Billie Eilish, Harry Styles, Megan Thee Stallion, and others.

However, the card that featured BTS members who performed their single “Dynamite” at the 63rd Annual Grammy Awards held a week ago, had a violent depiction only for the BTS.

The satire showed all seven members of the boy band portrayed as a whack-a-mole character that was hit over the head with a Grammy award having bruised faces.

What the hell is this? Why would you DO this? I really hope y’all get sued. pic.twitter.com/LclhQ008IH

ARMYs were quick to respond, calling out the card and its manufacturer for the racist portrayal.

The criticism was highlighted with the hashtag #RacismIsNotComedy, which led the company to apologize for the act.

@BigHitEnt, @Topps made a representation of violence in their illustrations towards B75. It's not funny and it's a mockery towards the rise in crime against Asians, please take legal action

The fact that we're alive is enough reason to be respected.#RacismIsNotComedy

#RacismIsNotComedy@Topps apologize!! And remove that cover! In this kind of situation when we asians are getting killed you are literally doing something so stupid and so disgusting thing!Regret it now!.its not only about BTS but the whole asian community!delete it rn! Speed up! pic.twitter.com/WVnpUgIgZy

Why was it upsetting? Clarify that to the public, then make a proper apology to the Asian community.

You depicted an Asian public figures as badly bruised and beaten down fully knowing the growing hate against Asian is happening in your country.

You are enabling hate. https://t.co/jzSywlOChJ

Amid the backlash, the Garbage Pail Kids cards, released a statement on Wednesday, March 17.

In its statement, the company revealed that the card would be pulled from production and also apologize for including it in the set.

“We hear and understand our consumers who are upset about the portrayal of BTS in our GPK Shammy Awards product and we apologize for including it,” the statement said.

“We have removed the BTS sticker card from the set, we have not printed any of the sticker cards and it will not be available,” it added.