Crime thriller series would binge you for hours! 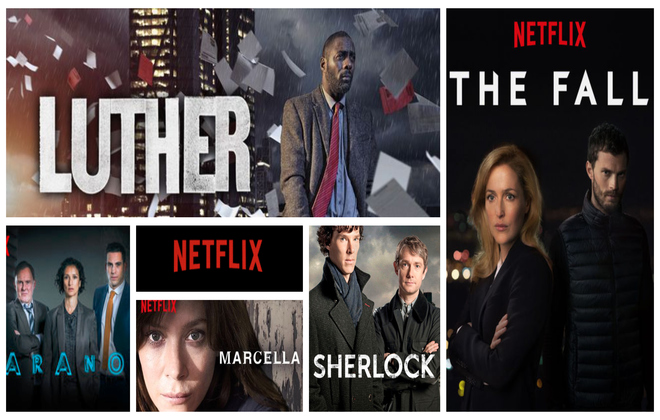 Netflix has a strong lineup of TV crime shows. If you are a fan of thriller crime genre, there is a huge collection available on the streaming site. But, would you have that much time to explore for your kind of crime series.

Here is a list of 8 super thrilling crime series which could channel your inner detective.

1. The Fall
The X-files detective Gillian Anderson returns to TV as Stella Gibson in “The Fall”, an expert in criminal psychology, to crack the case. Authorities in Belfast are stumped after a string of murders, and enlist Gibson to solve the serial killing cases. The show consists of three short seasons, but they’re enough to make you forget about Christian Gray and his Red Room, as he plays the serial killer this time.

2. Luther
Starring the People’s world sexiest man Idris Elba as Detective Chief Inspector John Luther. He tries to tries to find balance between just doing his job and his own demons.

3. Sherlock
Who isn’t aware of the Sherlock Homes adventures, but this BBC One’s series available on Netflix is mother of all crime thriller. Benedict Cumberbatch as Sherlock in this updated take on Sir Arthur Conan Doyle’s beloved mystery tales, the eccentric sleuth prowls the streets of modern London in search of clues.

By circumstance, two leading detectives are partnered to solve the murder, keeping the newspapers from derailing the investigation and trying to prevent the crime from impacting tourism at the beach where the boy was murdered.

The detectives are forced to put personal connections to the case aside to solve the crime that has changed the old-fashioned small town’s community forever.

5. Happy Valley
Number five on the list is Happy Valley. The critically lauded, masterfully crafted, and brilliantly acted British series is already recognized as one of the top dramas of 2014 is available on the streaming site.

Starring BAFTA winner Sarah Lancashire, ‘Happy Valley’ is a six-part drama written by Sally Wainwright, and follows the personal and professional life of hard-working, dedicated police officer Catherine Cawood in a small town where drunkards, drug addicts and teenage pregnancies are a way of life.

Her world is turned upside down when the man she thinks is responsible for her daughter’s death, Tommy Lee Royce (James Norton), is released from prison.

6. Marcella
The series will binge you to watch and you won’t literally want to miss a second of it because there is so much going on. Full of suspense, 2017 series ‘Mercella’ has two seasons rated 16+ on the streaming site.

Despite marriage woes, a tragic loss, memory blackouts and her struggles as a mom, a London detective excels at what she does best: catching killers. Starring, Anna Friel, Nicholas Pinnock, Ray Panthaki

When a woman is brutally murdered on a playground, a group of detectives find themselves drawn into a dark conspiracy as they search for the killer.

Actress Indira Varma is playing the Detective Sergeant Nina Suresh, who is assigned the task, solving the murder of a physician found stabbed in a playground.

8. Collateral
Collateral, a four-part series available on the streaming site will binge you to watch it till the end.

Set over the course of four days in London, Collateral explores the spiraling repercussions surrounding the fatal shooting of a pizza delivery man.

Detective Inspector Kip Glaspie (Carey Mulligan) refuses to accept that this is a random act of violence, and is determined to discover if there is a darker truth.