The occasion of DDLJ’s silver jubilee will be marked with the unveiling of, a bronze statue of Shah Rukh Khan and Kajol at Leicester Square in London.

As being reported, the statue will be a part of ‘Scenes in the Square’ film trail.

Andrzej Szymczyk is the sculptor behind the life-size statue and this will be the first-ever long-term Bollywood statue to be erected in the UK.

This new statue will be placed along the eastern terrace, outside the Odeon cinema, honouring this scene. Other London locations featured in the film include Horseguards Avenue, Hyde Park, Tower Bridge, and King’s Cross Station.

According to the Heart of London Business Alliance, the latest statue to join Leicester Square’s ‘Scenes in the Square’ movie statue trail will be of the king of romance, Shah Rukh Khan, alongside his co-star Kajol, from their film Dilwale Dulhania Le Jayenge.

Mark Williams, Director of Destination Marketing at Heart of London Business Alliance, in a statement, said: “It’s fantastic to be adding such titans of international cinema to our trail as Shah Rukh Khan and Kajol. Dilwale Dulhania Le Jayenge is one of the most successful and important Bollywood films of all time, and it’s exciting to be able to bring to the trail the first film that actually features Leicester Square as a location.

This statue is a fitting tribute to the global popularity of Bollywood and the cultural bridges that cinema can help build, and we’re in no doubt it will attract fans from all around the world.” 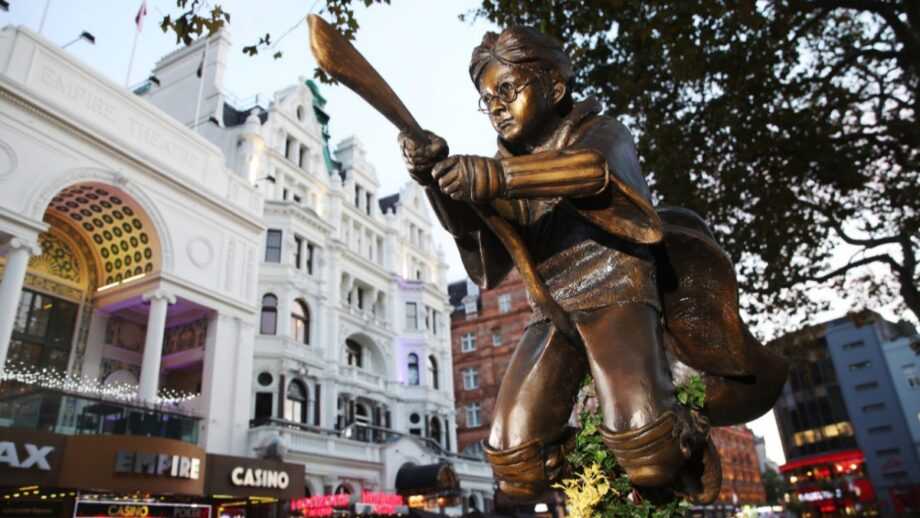 This DDLJ statue will join nine other film icons from the past 100 years, including The Harry Potter, Laurel & Hardy, Bugs Bunny, Gene Kelly in Singin’ in the Rain, Mary Poppins, Mr. Bean, Paddington, Batman, and Wonder Woman.