Trump’s dance moves that he did at one of his YMCA rallies, is now called #TrumpDance 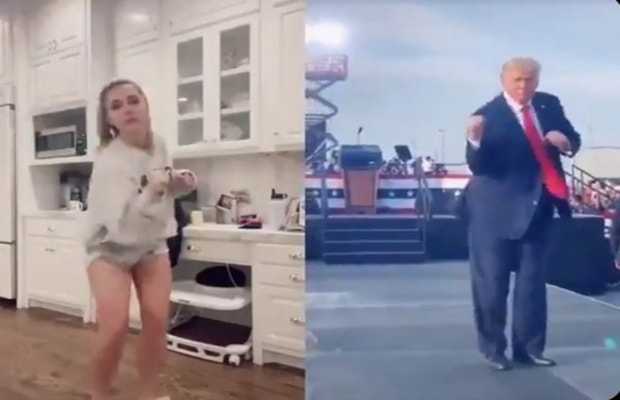 US President Donald Trump’s “YMCA” rally dance moves have inspired a new TikTok trend. The TikTok users and his supporters are having a ball with it, as they copy the dance moves and have declared it the “Trump Dance.”

The new dance trend features a mash-up between “Viva La Vida” by Coldplay and “Swing” by Savage, which originally the inspiration behind the trend called the “Viva La Swing” dance.

Even US president’s daughter Ivanka Trump retweeted a video of a TikTok user, with the caption “love it”.

But we are not sure whether the viral dance trend in support of Trump or to mock his moves:

tweet
Share on FacebookShare on TwitterShare on PinterestShare on Reddit
Saman SiddiquiOctober 20, 2020
the authorSaman Siddiqui
Saman Siddiqui, A freelance journalist with a Master’s Degree in Mass Communication and MS in Peace and Conflict Studies. Associated with the media industry since 2006. Experience in various capacities including Program Host, Researcher, News Producer, Documentary Making, Voice Over, Content Writing Copy Editing, and Blogging, and currently associated with OyeYeah since 2018, working as an Editor.
All posts bySaman Siddiqui