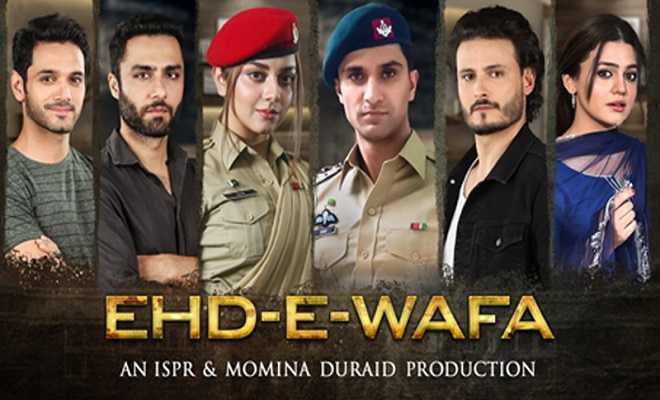 Ehd e Wafa has been consistently impressing its audience ever since it began. The main reason for the drama’s success was its different storyline which incorporated a social message in its theme while revolving around plots of friendship, love and journeys to self-discovery.

Written by Mustafa Afridi and directed by Saife Hassan, Ehd E Wafa stars Osman Khalid Butt, Ahad Raza Mir, Ahmed Ali Akbar, Wahaj Ali, Alizey Shah and Zara Noor Abbas in pivotal roles. The drama, whose final episode, will also be getting a cinema screening, recently released its trailer and even though we have already seen the majority of the events already transpiring in the drama, this one is very emotional.

The trailer begins with a tribute to Pakistani airforce, where we see Hamyun Saeed as an officer questioning Abhinandan, the captured wing commander of Indian airfoce. An apt tribute on the right date, the trailer then begins to narrate the story of the four friends, their commitments to life and love.

We know there will be a major twist at the end of the drama and the trailer showcases the same. While Saad is commanding troops at the battle front, Shariq reports from the mountains, amidst all the action. The trailer shows Saad wounded but we don’t know whether or not he’ll be able to survive the injuries and return back to Dua, who awaits him with his child.

Ehd e Wafa has the audience emotionally invested in its storyline. People are excited to see what will the final episode of the drama bring about. And with the final episode now screening in cinemas before premiering on TV, there’s a major possibility that people will be flocking to cinema houses to witness the climax without having to wait for it to air on television.