Yes, indeed good news for the Emily fans that Netflix has renewed its hit romantic comedy series “Emily in Paris” for a second season.

The series starring Lily Collins as Emily was launched at the start of October,  and was among the Netflix’s Top 10  list,  as per Nielsen.

“Emily in Paris” follows the story of Emily,  an ambitious girl in her twenties, marketing executive from Chicago, who surprisingly lands a job in Paris when her company acquires a French luxury marketing company. She is assigned to rewamp company’s social media strategy, and begins a new life in Paris that is filled with adventures and challenges, as move on in her new world, winning over her work colleagues, making friends, and experiencing new romances.

As title suggests, the series was shot completely on various locations in Paris and  France throughout.

The news of the series’ s getting a new season was announced in a zippy fictional letter from Emily’s fictional Parisian boss Paris Sylvie Grateau (Philippine Leroy-Beaulieu) written to her American boss Madeline Wheeler (Kate Walsh).

The full letter reads as:

Nous sommes désolées! We are writing to regrettably inform you that Emily Cooper will need to remain in Paris for an extended period of time. Despite her overconfident manner and lack of prior experience in luxury goods marketing, she has nonetheless managed to charm some of our hard-to-impress clients during her short time at Savoir. Call it bonne chance, or American ingenuity – I’m leaning towards the former – her results are impressive.

We hope that by extending her time in Paris, Emily will further the relationships she has already made, delve deeper into our culture, and perhaps pick up a few words of basic French.

We will work in conjunction with you on applying for a work permit on her behalf to prolong her time here. We love having Emily in Paris! But please don’t let her know that. 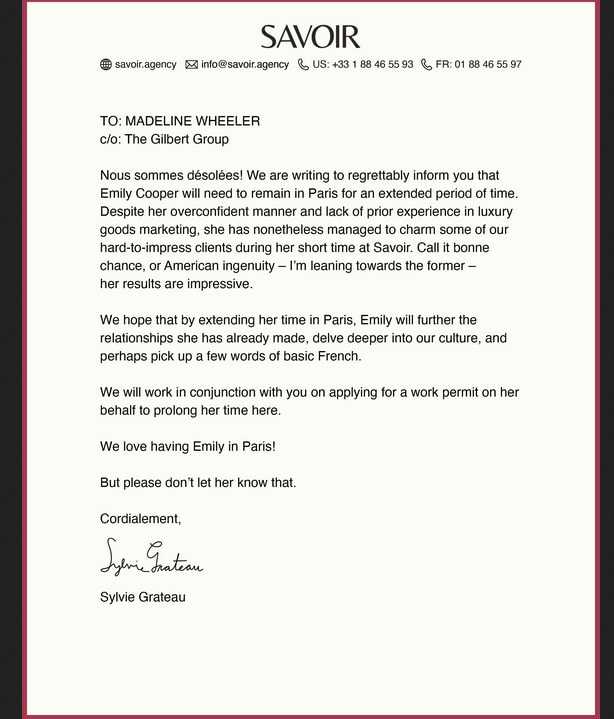