Just a few weeks left for the year 2019 to conclude and as the ritual Google has rolled out the list of the top 10 most searched TV shows of 2019 in the US.

And as expected the HBO’s epic fantasy series Game of Thrones turned out to be the most searched drama of 2019 in the US. Though the last season of the series wasn’t received well by the audience still it has been the most-watched series of the year.

GOT series also made headlines this year for its controversial final season, which saw over 1 million fans signing a petition demanding a remake “with competent writers”.

While Netflix’s super-hit series Stranger Things and When They See Us are on the second and third spots of the list.

Check out the list of top ten most searched and watched shows in the US according to Google: 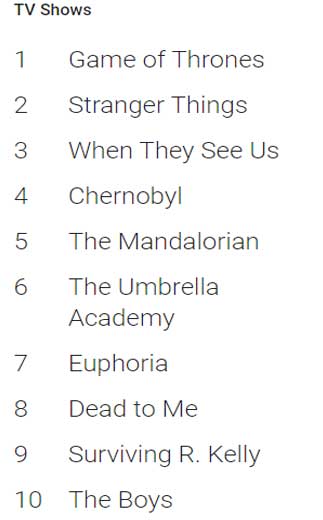