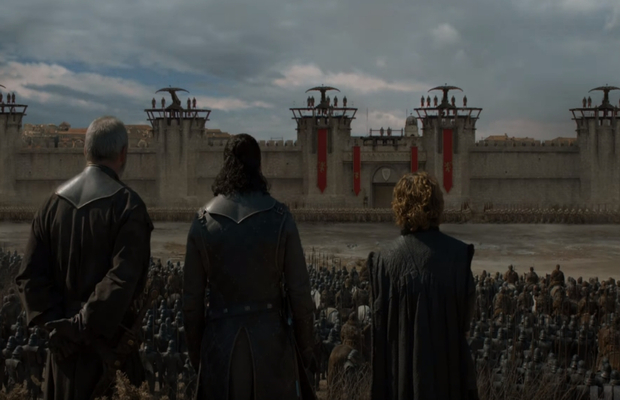 Still recovering from the Game of Thrones latest episode? Here arrives the preview of the upcoming episode-5.

Season 8, the final season, of Game of Thrones is getting close to its conclusion. After last night’s Episode 4, “The Last of the Starks”, there are only two episodes left until everything wraps up for the world famous, much anticipated, long-running HBO series.

HBO has released the preview of episode 5 but beware of it. For those who haven’t watched The Last of the Starks yet, preview contains spoilers!

The 4th episode ended on a rather tense note, Daenerys Targaryen apparently struggles to get her stronghold in the Last War, as Cersei Lannister cleverly strips Khaleesi of her aids.

The next week’s episode preview reveals that the battle has arrived at the King’s Landing’s doorstep.

HBO teases fans with few glimpses of Tyrion, who looks worried as he continues to reason with Danaerys at Dragonstone, while Cersei is still in fondness with the King’s Landing.

Jon Snow has arrived at the King’s Landing. The troops are gathered outside the city’s walls hinting at the battle, which is about to begin to claim the iron throne.

The trailer leaves fans hung up with excitement, with a foreboding shot. Euron Greyjoy seems to be standing at the deck of the ship, looks over the clouds as the rumblings of a dragon roar can be heard.

Read More : Game of Thrones Would Likely Make a Comeback, Here’s How!