Fans couldn’t stop sharing the news that the makers have now forgotten a plastic bottle in one of the scenes! 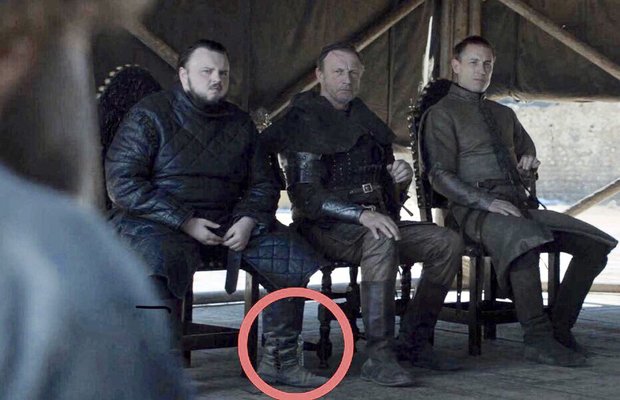 Last time it was the epic coffee cup blunder which was discovered in a scene of GOT S8-E4, HBO had put out an official statement joking that “Daenerys had ordered an herbal tea”. Then it was digitally removed from the episode.

And this time in the last episode of the season finale, eagle-eyed fans discovered a plastic bottle in the scene. And as soon as the episode ended, social media was laden with memes and fan queries about this latest blunder.

Do not read any further if you haven’t watched the last episode yet!

The scene in question is the one in which Bran Stark (Isaac Hempstead Wright) was declared the king of the six kingdoms by the lords of different regions.

In the scene Tyrion Lannister (Peter Dinklage) standing and heads of different houses seated in front of him. Samwell Tarly (John Bradley) is also sitting in the panel, and just next to his right foot, a plastic water bottle was spotted peeping out.

The greatest crossover of 2019 is Samwell Tarly and a plastic bottle #GameOfThrones pic.twitter.com/mtPVv6sv9J

And of course they couldn’t end it without a plastic water bottle in the council scene 🤦🏻‍♀️ #GameofThrones pic.twitter.com/nWnDJuN7T1

Lmao they did it againnnn! First the Starbucks cup and now a water bottle.#GameofThrones pic.twitter.com/YRBea48To9

tweet
Share on FacebookShare on TwitterShare on PinterestShare on Reddit
Saman SiddiquiMay 20, 2019
the authorSaman Siddiqui
Saman Siddiqui, A freelance journalist with a Master’s Degree in Mass Communication and MS in Peace and Conflict Studies. Associated with the media industry since 2006. Experience in various capacities including Program Host, Researcher, News Producer, Documentary Making, Voice Over, Content Writing Copy Editing, and Blogging, and currently associated with OyeYeah since 2018, working as an Editor.
All posts bySaman Siddiqui