Game Of Thrones star cast has dismissed the backlash against the series’ ending as a “media-led hate campaign”.

The panel opened with the cast raising cups of Starbucks coffee to the crowd, a reference to the infamous production gaff in the final season which saw a rogue cup appearing in an episode. 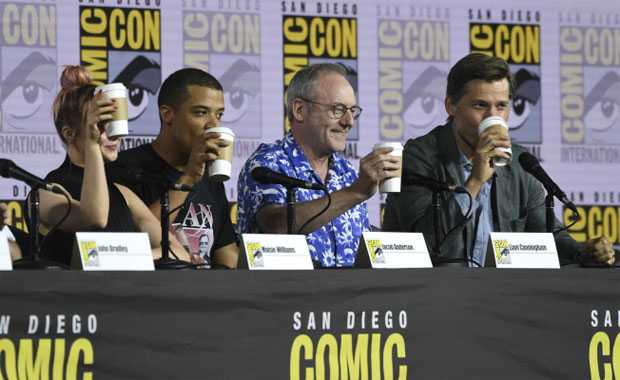 When asked about his thoughts on the ending, Hill replied jokingly, “I don’t regret starting the petition”, before addressing the thousands of fans inside Hall H of San Diego Convention Centre.

He said that “We’re very grateful for your fandom over the years and I think this is the reality rather than a media-led hate campaign.”

Cunningham, who played Davos Seaworth, also defended the ending, pointing to how beloved the series was over its eight-year run.

Despite the misgivings over season eight, there was a buoyant mood among the actors, who were given a standing ovation as they walked on stage.

Williams, who played Arya Stark, was asked about the fate of her character, who ended the show by heading off to explore “west of Westeros”.

“I’m sure she’s having a wonderful time, like Dora The Explorer”, Williams said.

Williams was also asked about the relationship between Arya and Gendry Baratheon after they enjoyed an intimate moment.

However, she does not see a future for the couple.

Williams said: “She’s a lone wolf. I don’t think being with a partner is what would make her feel most at home, or the most fulfilled”.

Hempstead Wright, who portrayed Bran, joked Westeros is “now a surveillance state” under Bran’s rule, due to his omniscience.

While the cast drew a rapturous reception, Nikolaj Coster-Waldau – who played Jaime Lannister – was booed after describing his character’s death in the arms of his sister and lover Cersei as “perfect.”

“It made sense to me,” said the actor, before being interrupted by a heckler.

“This show has brought so many people together, watching it, loving it. So obviously when it comes to an end it’s going to piss you off no matter what … just don’t call people names,” he added.

Game Of Thrones creators David Benioff and DB Weiss had also been due to take part in the panel but HBO announced on Thursday they had dropped out.

It was being expected by many that the cast will face tough questions about the ending during the panel’s planned Q&A session, but it was scrapped due to time restrictions.

The atmosphere was quickly lightened as cast members joked about stealing props from the set.

Hempstead Wright said he “ended up with a wooden spoon,” while Maisie Williams reduced the panel to giggles after admitting to stealing fake blood from one scene and leaving it on the bathroom floor of her dressing room.

John Bradley, known to fans as Samwell Tarly, addressed another controversy, shooting down theories that he was to blame for a plastic water bottle accidentally left in shot during the final season.

“Pardon me for being thirsty,” he joked.

The Comic-Con continues until Sunday in San Diego