Did Hadi surrendered to meet Khaani, one last time?

With Mir Hadi expressing his last wish, will Khaani come in to meet him before he is hung? 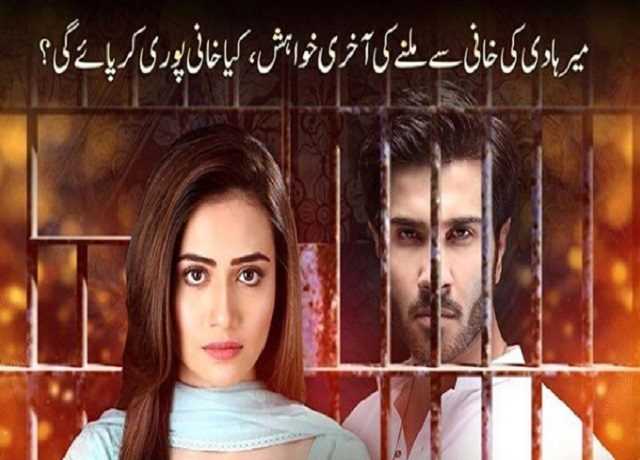 Khaani, a drama that has kept us hooked from the word Go. Although, we actually expected Khaani to be a love story between Mir Hadi and Khaani, the way the story has progressed has left us shocked but also highly impressed with the power of Asma Nabeel’s style of writing.

The drama has very subtly raised issues and questioned. Issues regarding parenting, corruption, misuse of power and how the world is a reaping ground for what we sow, Khaani, has brought about an awareness that has opened eyes wide.

Khaani’s twin brother, Sarym, was killed by Mir Hadi. He frightened the family and forced them into forgiving him, all on the power of his father’s status in politics. An obnoxious Casanova, Hadi was used to having whatever he wanted, never turned down or scolded for right or wrong by his family. Mir Shah and Sitara, parents to the ever so spoilt Hadi, focused more on covering the mess Hadi made rather than trying to correct him.

On the other hand, the Khan family, who brought up their children, 3 girls and 1 boy, on principles and focused more on their upbringing, were left devastated with the murder of their only son, shot by Mir Hadi during an anger outburst.

Sanam Khan, known endearingly as Khaani, had a major transformation on her brother’s death. The scared girl grew up within days and became the soul supporter and breadearner for the family. However, she took Mir Hadi’s fancy.

This is where all hell broke loose. Mir Hadi, fell in love with Khaani, but she would not concede. He forced, coaxed and tried his best to make her accept everything and it resulted in the family fleeing town. Khaani married Arham, in a twist of faith and he turned out to be her biggest support.

With Arham’s support, Khaani and the family reopened the case. During this time, Mir Hadi had a change of heart, devoting his life to Allah and asking for forgiveness. Brought back to jail, Hadi, confessed to his crime and asked for a death sentence, which was granted. He confessed not only killing Sarim but destroying the Khan family’s life and how he ruined everything for them.

Now, upon being granted a death sentence, Hadi has requested to meet Khaani as his very last wish. Khaani, hates Hadi from the core of her being. The kind of hatred that made her smile on being served justice for her brother’s murder. Will Khaani now grant Hadi’s wish to meet him for the one last time. Did Hadi actually surrendered so that he could meet Khaani one last time? Will Khaani turn out and listen to what Hadi has to say?

To know the answer to this, watch Khaani tonight at 8:00 pm only on Geo.