Netflix has announced that Beyoncé’s now-iconic Coachella performance is coming to the streaming service on April 17.

The Grammy-award-winning singer has made history at Coachella last year, as she became the first woman of color to headline the annual festival.

Beyoncé opened her performance at by singing “Crazy in Love” accompanied by a New Orleans-style brass marching band, wearing a yellow hoodie with the Greek Letters Beta Delta Kappa. The yellow hoodie was a reference to the Divine Nine, the five African American fraternities and four sororities. 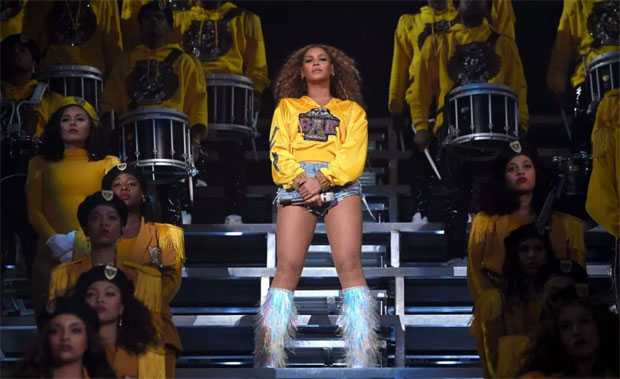 Netflix first teased the audience with a simple, yellow promotional image for a project titled Homecoming, set for an April 17 release date. But fans were quick to guess what exactly that meant to be.

Later, Netflix shared the trailer of the documentary Homecoming: A Film by Beyoncé, an intimate look at the making of the singer’s groundbreaking 2018 Coachella performance.

The trailer is narrated by audio of Maya Angelou which features plenty of behind-the-scenes footage of the preparation that went into the set, as well as brief glimpses of Jay-Z and Blue Ivy.

This intimate, in-depth look at Beyoncé’s celebrated 2018 Coachella performance reveals the emotional road from creative concept to a cultural movement.

Netflix quoted, saying “Homecoming: A Film By Beyoncé, will be “interspersed with candid footage and interviews detailing the preparation and powerful intent behind her vision, [the movie] traces the emotional road from creative concept to a cultural movement.”