Earlier in his tweet, Salam Ahmad asked his followers if they want to see the all time favourite songs by the band Junoon this year 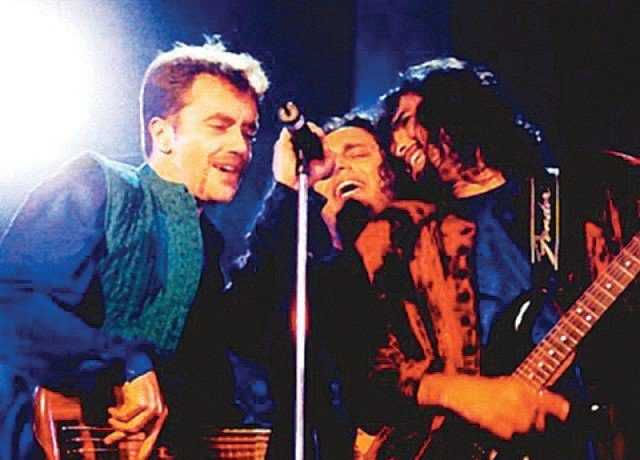 Earlier in his tweet, Salam Ahmad asked his followers if they want to see the all time favourite songs by the band Junoon this year, and he also mentioned about dreams which are never impossible, which gave a clear hint that something is on its way.

It became a developing story later when Salman Ahmad himself confirmed the news of Junoon’s reunion being planned after 25 years.

everyone wants to unite for the fans. Junoon fans are the #1 reason. https://t.co/VEYcNRb0Ap https://t.co/LfneeARseD

While talking to a website Salman Ahmad quoted that the classic Junoon line up is ready to take off in 2018, we’re doing it for the fans that deserve to see Unity, Hope & Junoon once again.

Junoon doesn’t require any introduction. For those who grew up in 90’s, Junoon had been their passion for music. It’s been the most happing scene in Pakistan’s as sufi rock music, with Ali Azmat as the lead vocalist, Salman Ahmad and Brian O Connell on instruments. The band sold more than 30 million copies of their music albums around the world. In 90’s, the New York Times referred Junoon as Pakistan’s U2. The band had massive fan following both on national and international levels. However the band broke up after the release of album Deewar, in 2005 Azmat went on to pursue his solo career, and Brian O Connell went back to the states.

And today after the news of reunion of band the fans are overwhelmed, messages are pouring onto the social media, eager to know the further details. A fan posts on social media to buy the tour tickets in advance:
A curious fan questions whether Ali Azmat will be part of reunion or not, to that Salman Ahmad replied via quoting fan’s tweet that, ” Ali Azmat is getting himself fit for the reunion.”

My brother @RealAliAzmat is in the mountains he's getting himself fit for the Junoon reunion🎸🎸🎸 https://t.co/SaJBBECjeC

After all the announcements, music fans of Junoon all over the world wait eagerly for further details. It will definitely be worthy to wait a little more to see all the great hits by the music band to be played again. Junoonis are waiting!

Associated with reunion news, there were speculations about Junoon on the way to Broadway. Later it was confirmed by Neil Berg, lyricist and composer that he has signed a contract with Salman Ahmad based on his autobiography to produce a musical for the Broadway, which will feature Junoon’s hit songs and will surely  make history as the first western musical to be based on a Pakistani musician’s life.

tweet
Share on FacebookShare on TwitterShare on PinterestShare on Reddit
Saman SiddiquiFebruary 8, 2018
the authorSaman Siddiqui
Saman Siddiqui, A freelance journalist with a Master’s Degree in Mass Communication and MS in Peace and Conflict Studies. Associated with the media industry since 2006. Experience in various capacities including Program Host, Researcher, News Producer, Documentary Making, Voice Over, Content Writing Copy Editing, and Blogging, and currently associated with OyeYeah since 2018, working as an Editor.
All posts bySaman Siddiqui