The legal battle over Legend of Maula Jatt continues in Lahore High Court. As the original filmmaker’s son Muttaqi Sarwar has revealed that he has submitted an application for a stay order in the Lahore High Court to prohibit the team of the upcoming film the Legend of Maula Jatt from using the name (or similar title), character and dialogues that violate intellectual property law.

According to the latest development in the filed petition, Muttaqi Sarwar claims that Maula Jutt is being remade illegally and he owns all copyrights related to the film. 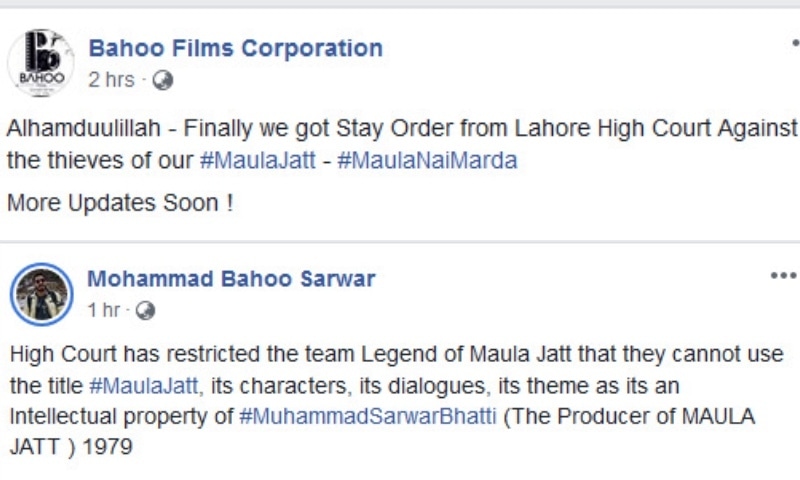 It was earlier in January that makers of film ‘The Legend of Maula Jatt’ have been issued legal notice for producing the film without taking the permission. Son of the original blockbuster ‘Maula Jutt’ producer, Muttaqi Sarwar has sent the notice.
https://www.oyeyeah.com/entertainment/violation-of-copyrights-legal-notice-issued-to-makers-of-the-legend-of-maula-jatt/

He further added that “The Honourable High Court has merely directed us to not use any unauthorized copyright or trademarks. To this extent, there is no change in the status quo. We are not using any unauthorized copyright or trademarks, anyway. We have a valid Copyright Certificate on the script for the Legend of Maula Jatt. The Honourable High Court is cognisant of our Copyright Certificate”.

He further added that “It must also be stated that media should bear restraint in reporting and discussing today’s Order since there is no written order as of yet”.