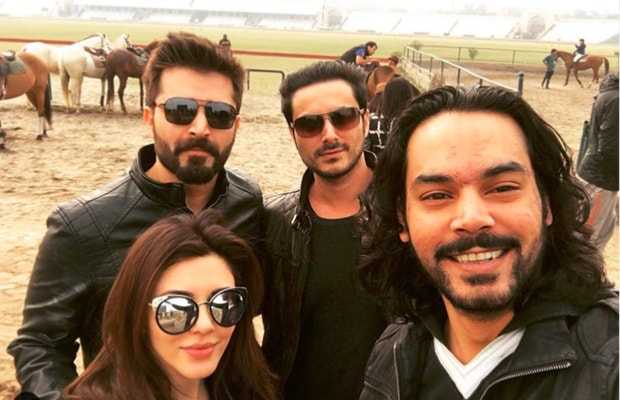 It’s been a while that film fanatics are awaiting the release of Fawad Khan and Mahira Khan starrer Legend of Maula Jatt, reboot of an old classical movie Maula Jatt but now it seems that the much-awaited film has seen the light of the day and is coming out soon.

Hikmat also shared an image from the day when they took Gohar Rasheed and Hamza Ali Abbasi, two of the key cast members of LMJ, to their first riding lesson early in the morning even before the film’s shooting had set in.

She said: “Long before the shoot started, this was the first day we took @realhamzaaliabbasi

and @mirzagoharrasheed to their riding lessons at the break of dawn. What a fun day it was!!

P.S The release date is not too far and the official release date announcement is in few days inshallah. Any guesses?”

We just can’t hold our excitement and are eagerly awaiting the release of the 1979 cult classic’s remake that revolves around the epic rivalry of Maula Jatt and Noori Nath.

The release date of what’s being touted as the most expensive film of Pakistan to date kept postponing for two years now because Sarwar Bhatti, the maker of the original movie had filed a copy right case against it.

Well, things have now settled down between director Bilal Lashari and Sarwat Bhatti and the matter has been resolved last week.

The film also stars Humaima Malick and in a pivotal role. The cast also includes Faris Shafi, Shafqat Cheema, and Nayyer Ejaz, among others.

The movie will tentatively hit cinemas on Eid-ul-Fitr 2020 and will also become the first film from Pakistan which will release in China the same day as its domestic release.