The film is directed by Oscar-winning filmmaker Martin Scorsese 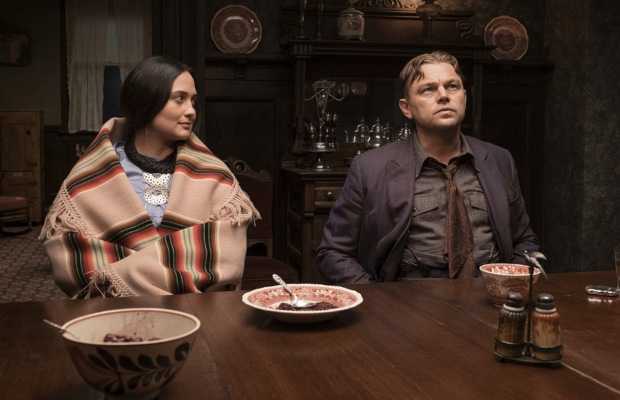 Leonardo DiCaprio has shared the first look from the upcoming period thriller ‘Killers of the Flower Moon’.

The much-anticipated film is directed by Oscar-winning filmmaker Martin Scorsese and also stars Robert De Niro in a pivotal role.

In an Instagram post, Leonardo shared a picture of him and Lily Gladstone in a scene from the highly anticipated upcoming film. Both the actors can be seen sitting at a dinner table.

Leonardo will be seen playing the character of Ernest Buckhart, Lily plays his wife Mollie Burkhart in the film.

The pic depicts Leonardo DiCaprio and Lily Gladstone, a white man and an Osage woman who fall in love in Oklahoma during the early 20th century,

New York Post also shared the same photo in a tweet and called Leonardo ‘unrecognisable’ in the pictures.

Though Leo looks a little pale in the picture but could be easily identified.

Guardians of the Galaxy director James Gunn wrote, “He must be the person in the left if he’s unrecognizable because the person on the right looks exactly like Leonardo DiCaprio.”

he's the fellow on the right.

Idk if anyone's said yet but the guy sitting next to the girl staring up is Leo pic.twitter.com/LuXUDENQmw

Wow, a TRULY unrecognizable #LeonardoDiCaprio spotted once upon a time in Hollywood. pic.twitter.com/KJL5gIbXEJ

As being reported, Scorsese started filming on April 19 after getting delayed over a year due to COVID-19 concerns.

The film is based on David Grann’s best-selling book of the same name.

The nonfiction work is based on the Osage Nation murders, in which Native Americans in 1920s Oklahoma were massacred after oil was discovered on their land.