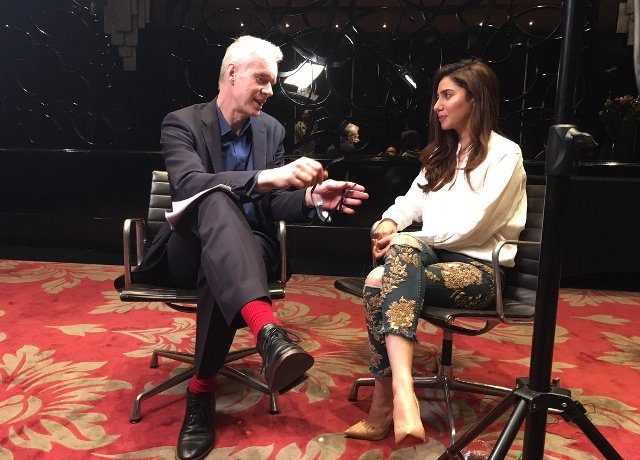 Mahira Khan, made quite a few headlines throughout her London trip this time. At first Khan made her presence felt at the UK Asian Film Festival and later at the UK premiere of the Cake the Film. And now, since her interview with Stephen Sackur for BBC World, “Hard Talk” has aired, the world is in for a number of revelations.

Mahira Khan honored with an award at the UK Asian Film Festival!

Mahira,  spoke candidly on various subjects including her movie Verna. However, it was first time that Khan opened about her pictures going viral, while being in New York, alongside Ranbir Kapoor.  Mahira openly stated, ”That was the first time in my entire career that I was caught up in a so called controversy and it was strange because there were so many things in that. One, obviously you feel violated, you are in a personal downtime moment and someone has just photographed you”.

This was a terrific interview! Catch it if you can…. @TheMahiraKhan https://t.co/u3Xun27hXn

Adding further and addressing the biggest controversies of her life, Mahira mentioned, “Obviously there was an uproar because here I was, someone who is extremely loved in Pakistan, people sort of keep me up on this pedestal you know, they treat me with a lot of love and a lot of respect. And there are certain things I didn’t realize that they don’t want to see me do. At that point yes, it was crazy honestly because it lasted for a while… It was crazy, it was ridiculous.”

Mahira Khan also talked about her debut Bollywood film, Raees, opposite Shahrukh Khan. The film turned out to be a massive success worlwide and joined the 100crore club in a short time.  Raees, however, was banned in Pakistan. On being questioned about Raees the actress said, “I was more excited about Raees being released in Pakistan than anywhere else. All I wanted was to sit there with my best friends and my son Azlaan and the audience and watch Raees but I couldn’t.”

Adding further about the censor board and the ban on Raees in Pakistan, Mahira stated, ”I think their decisions sometimes are based on things that don’t even concern the film. So you know I don’t think there was a specific reason. They said it but I don’t know. I don’t know if ‘Raees’ was released today, would it be released”, said Mahira Khan regarding the film not being allowed to release in Pakistan.

Currently Mahira Khan is busy with her upcoming film ”7 Din Mohabbat In”, which is to release this Eid. The film stars Shehryar Munawar in the lead alongside Javed Sheikh, Amna Ilyas and Hina Dilpazeer in pivotal roles.

tweet
Share on FacebookShare on TwitterShare on PinterestShare on Reddit
Saman SiddiquiMarch 26, 2018
the authorSaman Siddiqui
Saman Siddiqui, A freelance journalist with a Master’s Degree in Mass Communication and MS in Peace and Conflict Studies. Associated with the media industry since 2006. Experience in various capacities including Program Host, Researcher, News Producer, Documentary Making, Voice Over, Content Writing Copy Editing, and Blogging, and currently associated with OyeYeah since 2018, working as an Editor.
All posts bySaman Siddiqui