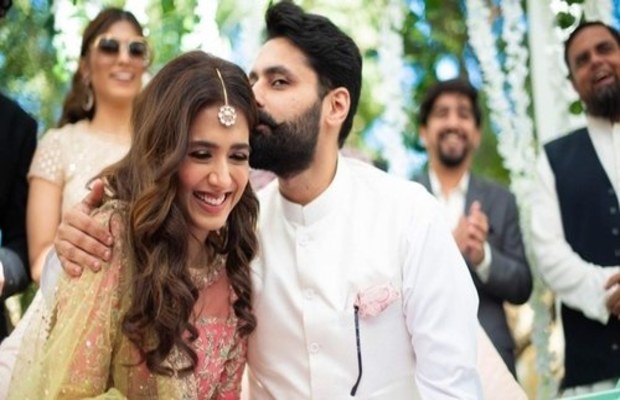 Sunday afternoon Jibran Nasir and Mansha Pasha got engaged in an intimate ceremony, and social media was abuzz with congratulatory messages and love for the couple. Soon after, pictures from the event started to come in which again were given ‘Masha Allah’ chants from all corners.

However, one video that came out – and is now more viral than others – did not go down well with Twitteratis who are at Jibran’s case for kissing his bride after exchanging rings.

The video shows Jibran talking about his ‘right to kiss’ Mansha by loudly saying “Jaiz hai?” (It’s allowed right?); as he proceeds to give his bride a small kiss on the cheek.

The video has drawn ire from social media users who are bashing Jibran for a) kissing and b) calling it a rightful act.

While some Twitter users called it a ‘publicly stunt’ by the social activist and said that he does things to get attention on social media, some called it a ‘cute move’ on his part.

“Awww Jibran nasir u so innocent. Actually he knows that kissing after engagement is not jaiz but he wanted to kiss her anyways so he act like he is an innocent ” so people can react like awww awww how cute how sweet hayeee his innocence stole my heart,” tweeted a user.