Model Salma al-Shimy and photographer Houssam Mohammad were arrested in Egypt for a steamy at the ancient pyramid.

As being reported, Egyptian model-influencer Salma El-Shimy and photographer was arrested on Nov. 30 after holding a photoshoot in Saqqara, an archaeological site in the city of Giza. However, both were released on bail earlier this week after widespread criticism over the arrests.

The authorities arrested the model and photographer after the photos from the shoot at an ancient pyramid site went viral on social media. 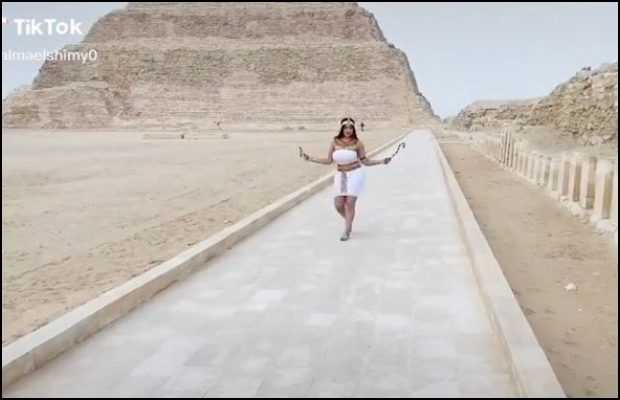 The photos of Salma al-Shimi posing in a Pharoah-like outfit were branded “provocative and offensive”.

The arrests were made for taking photos next to the Step Pyramid of Djoser – which dates back 4,700 years – without permission.

A media report, citing an Egyptian judicial source said that both were accused of “taking photos without authorization in the Saqqara archaeological site” and released on bail of 500 Egyptian pounds ($32) each pending the results of an investigation.

According to the State-owned publication Akhbar el-Youm, on Tuesday Shimi had appeared in front of a public prosecutor and had objected to all of the accusations made against her, arguing that her aim had been to promote tourism rather than offend Egypt.

The model also claimed that she did not have any knowledge that a permit was required to shoot at the historical sites.

In Egypt for being considered as a conservative society, Model’s act also met with harsh criticism.

Your photos are really disgusting and do not represent the history of our civilization at all.👎🏻#سلمي_الشيمي pic.twitter.com/pIqL51U41m