The fifth season of Money Heist will release in two parts 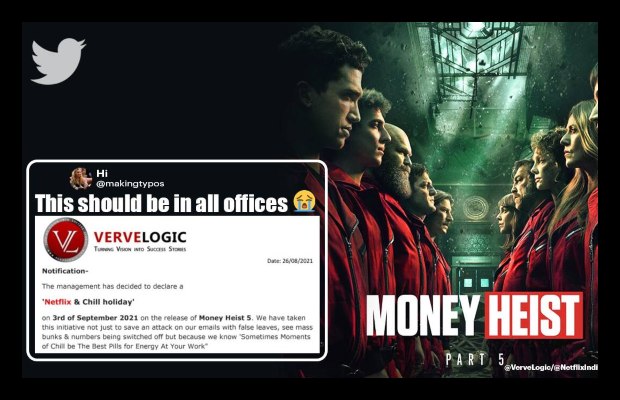 Money Heist Season 5 is premiering on September 3 on the streaming platform Netflix.

The fans of the international hit Spanish series originally known as La Casa de Papel, are more than excited to watch the final season.

Well, we guess no one can match the level of excitement of this Rajasthan, India-based company in Money Heist fever.

As being reported, Verve Logic, an IT firm based in Jaipur has given an off to all its employees to binge-watch the series!

Earlier this month, Netflix had teased on Twitter: “Can we assume that 3rd September is a bank holiday? Money Heist day.”

And surprisingly, in response to the OTT platform’s tweet, Verve Logic, said, “Not sure about banks but we are definitely keeping a holiday on 3rd September! Jaldi Aao.. Jaldi Aao…”, while tagging Netflix.

“We are absolutely happy to announce an off on 3rd September naming it to be “Netflix & Chill Holiday” on the release of the final season of #MoneyHeist”, the tweet said.

Have Been Going Over the Love We have Received.!
Yes it is real and we are absolutely happy to announce an off on 3rd September naming it to be "Netflix & Chill Holiday" on the release of final season of #MoneyHeist @NetflixIndia– Please don't end this one! "Kehdo Ye Juth Hai"❤️ pic.twitter.com/M9RmFbZPOi

And even Netflix was left surprised!

We had our "bank work" excuse ready for our boss but this is fantastic! 💯 https://t.co/2wb5c6MORm

Furthermore, the CEO of the private firm has even sent a letter to his employees to formally announce the holiday.

“We have taken this initiative not just to save an attack on our emails with false leaves, see mass bunks and numbers being switched off but because we know ‘Sometimes Moments of Chill be The Best Pills for Energy At Your Work,” the letter signed by CEO Abhishek Jain read.

“So grab the popcorn, and be prepared to wave a final bye to our most loved professor and the entire caste,” he wrote.

So all the Money Heist fans out there would you share this with your bosses?

Well, we can say, this could happen only if your boss is obsessed with binge-watching the series.