Robin Wright will be seen on the screen for one last time as the president of America. 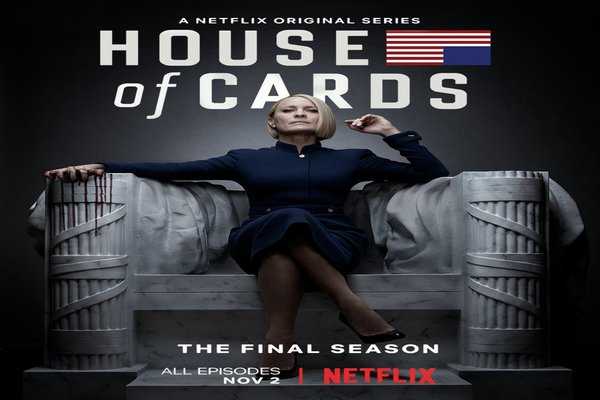 One of the Netflix’s popular series House of Cards’ will be returning with its final season to enthrall the viewers on November 2nd, this year. The news was shared via the Twitter handle of the streaming giant. Netflix itself shared the poster of Robin Wright as Claire Underwood with a tweet that read, “The Final Season. November 2. #MyTurn.”

This drama series made into headlines  after its former lead actor and Hollywood star Kevin Spacey was accused of sexual harassment in the wake of #MeToo movement.

Beau Willimon has developed the series House of Cards, an adaptation of the 1990 BBC miniseries, which was based on the same name novel written by Micheal Dobbs. The first season of the political thriller was released in 2013.

House of Cards happens to be one of those rare shows that has received praises from both critics and the general public. It has received 53 nominations for various category awards till date and has won seven of them. House of Cards was one of the first original web series to receive a nod from the Primetime Emmy Awards.

Golden Globe and Emmy winner Robin Wright will be seen on the screen for one last time as the president of America. Diane Lan, Greg Kinnear, Michael Kelly, Jayne Atkinson, Patricia Clarkson, Constance Zimmer, Derek Cecil, Campbell Scott and Boris McGiver, will be joining her in the sixth season of the show.