Fans are going to cherish it until #SacredGames2 begins. 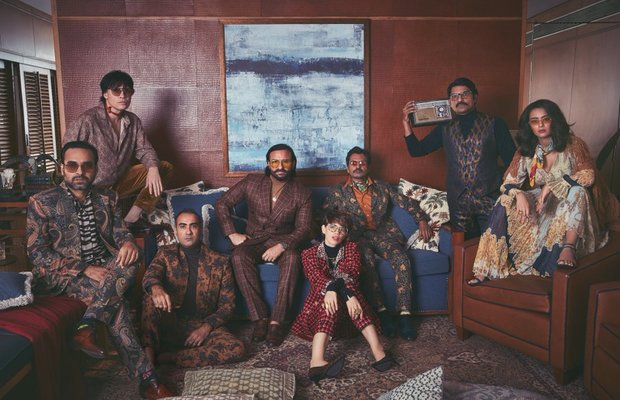 Season 2 of much anticipated Netflix series Sacred Games will hit the streaming website on 15th of August. The announcement premiere date along with a teaser trailer has aroused a new level if curiosity among the fans.

The anticipation surrounding the series is on an all-time high as the official trailer does offer a new set of twists and turns, but before series makes its premiere Netflix has treated fans by sharing a photo featuring the season 2 cast.

Sacred Games 2 trailer: Nawazuddin Siddiqui and Saif Ali Khan are returning to Netflix with the dangerous game on August 15

Netflix has presented the entire cast of the series in an all-new retro, edgy, and stylish look conceptulizing the nostalgic ’70s vibe.

Netflix captioned the photo saying: Meet the cast of Sacred Games 2 reimagined as gangsters from the ’70s. They might play gritty characters on screen, but this ultra-glam shoot tells us a whole different story. Here’s a sneak peek into the exciting new season, and what each character has to offer.
#SacredGames2
https://www.instagram.com/p/B0NNbIEglTj/

A rare picture of everyone getting along. We are going to cherish it until #SacredGames2 begins. pic.twitter.com/583NUDVQvc

The second season of the series will pick up from the nail-biting climax of Season 1. Saif Ali Khan who plays Sartaj Singh is going to set on a journey of self-discovery, struggles to solve the mystery of Gaitonde’s third father.

There are a few more BTS shared by Netflix making it a treat for series fans, as they give detailed overview of the characters:

Season 2 has Gaitonde taking his business international. “See, the way he talks, the way he walks, remains the same, it’s the change in circumstances that brings about a change in any man’s internal state of affairs. It seemed unbelievable to me, but when we finally went abroad, it hit me that we’re actually filming this series internationally,” says @nawazuddin._siddiqui, recalling the sheer scale of the production.

With expectations running high for Sartaj, Saif remarks that his character faces a lot of additional issues along with the weight of saving the world this season. “Season 1 was a setup, which deals more with the inner workings of his mind, personality and background. In Season 2, there’s a lot of tension and action. It’s got a few daddy issues as well, which is the reason Sartaj gets sucked into it.”

Kalki Koechlin plays the mysterious character of Batya in the upcoming season. Talking about her role, she says, “She is a lost soul who is wandering from place to place, looking for a worthy cause to fight for when she meets Guruji. Her transformation is quite interesting as it seems to parallel Sartaj.”

tweet
Share on FacebookShare on TwitterShare on PinterestShare on Reddit
Saman SiddiquiJuly 22, 2019
the authorSaman Siddiqui
Saman Siddiqui, A freelance journalist with a Master’s Degree in Mass Communication and MS in Peace and Conflict Studies. Associated with the media industry since 2006. Experience in various capacities including Program Host, Researcher, News Producer, Documentary Making, Voice Over, Content Writing Copy Editing, and Blogging, and currently associated with OyeYeah since 2018, working as an Editor.
All posts bySaman Siddiqui