2018 has been witnessed a year for the horror genre 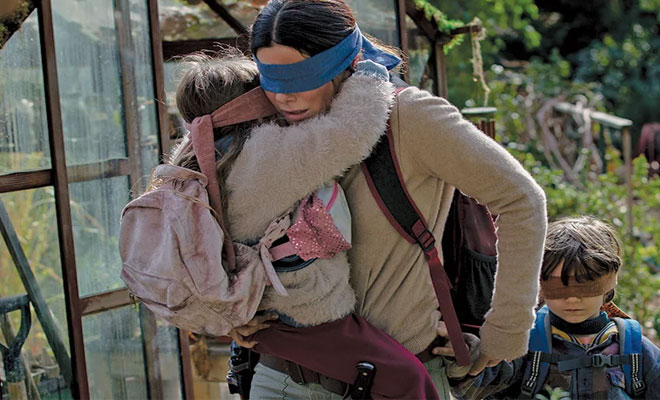 Netflix decided to give all of us ‘goosebumps’ with the newly released Bird Box. The movie is being described as one of the scariest things people have ever seen.

2018 has been witnessed a year for the horror genre with films like A Quiet Place storming the box office, and movies such as Hereditary giving people nightmares for weeks.

Bird Box is one of the most terrifying films ever released, the trailer was enough to raise the hairs on the back of one’s neck and it has certainly been received well online.

The movie is a post-apocalyptic thriller, based on the 2014 novel of the same name by Josh Malerman. It follows Sandra Bullock’s pregnant Malorie as she joins a band of survivors including two young children in an attempt to escape an unknown force which is causing mass suicide.

When victims lay eyes on the mysterious and dangerous force they will take their own lives, meaning Malorie and the children best hope of survival is to operate blind.

People who have watched the film are sharing their thoughts on Twitter, Bird Box is even more chilling than you can imagine.

#BirdBox is honestly terrifying. Apocalyptic movies freak me out 😭

In an interview with the director of Bird Box, Susanne Bier, discussed what it was that drew her to the project.

“I think watching a movie like that allows us to play that game, but because it’s in a confined space of two hours, you can do it relatively freely. I think it’s like fairy tales for kids. They can be really harrowing, but I think in a way that’s also kids addressing the most dangerous thing they can think of, the scariest thing they can think of, meeting a witch on the way.

I think for us, dystopian post-apocalyptic movies are a bit like that. That world that we fear is coming to the end, how am I going to behave and do I understand any characters behaving in a certain way? Part of what drew me to this was firstly it has a female protagonist, which very few of those movies have. It has a badass female protagonist. She’s hard and she’s brutal. She does whatever it takes for those kids to survive and it’s not always pleasant. I think that was really interesting.”

Bird Box is available to stream on Netflix now.