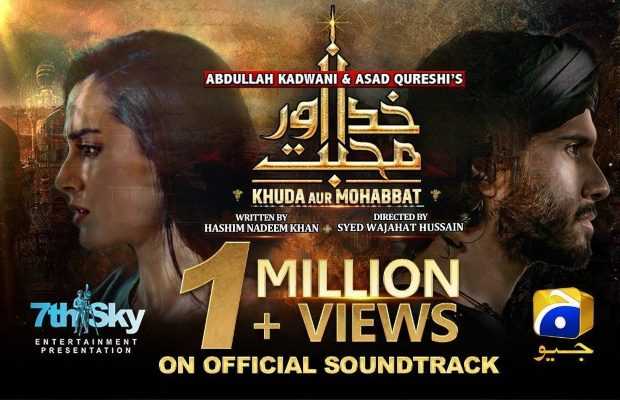 The most anticipated drama of the year ‘Khuda Aur Mohabbat 3’ has been creating a great buzz amongst the viewers ever since its teaser and trailer surfaced on air.  There are immense curiosity and excitement about the drama. Abdullah Kadwani and Asad Qureshi of 7th Sky Entertainment released the original soundtrack (OST) of ‘Khuda Aur Mohabbat 3’, and it has set a record with 1 million views.

With more than a million views on YouTube in the first 12 hours, the numbers speak volumes about the manner in which the OST has been received. And it is being lauded across all credible platforms.

The soulful track that premiered on Friday (January 29), has struck the right notes with the viewers.

There are singers and there are magicians and then there is the musical prodigy Rahat Fateh Ali Khan. The melodious OST is crooned by Khan; over the years a soundtrack by him is like an event now. Nish Asher has also lent his vocals to the track. With the ever so reliable Naveed Nashad as the composer and dependable Qamar Nowshad as the lyricist, one expects nothing less than a classic track in the offering.

One can expect this one to be hummed around or seen online either on a repeat mode since it would be best suited with the narrative. For the unversed, Rahat has also been associated with 7th Sky projects like ‘Mere Meherban’ and ‘Khaani’.