Oye Picks: 6 trending dramas you ought to watch right now! 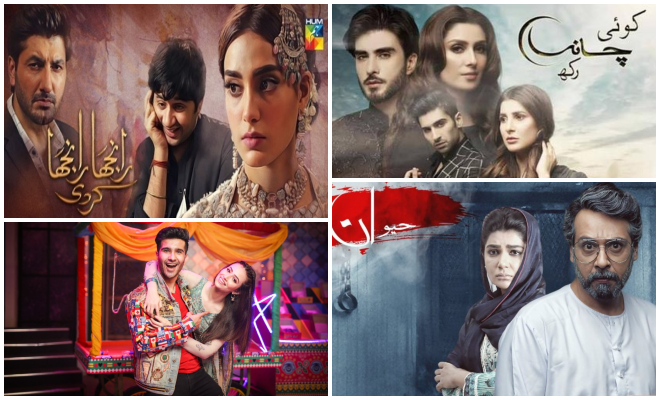 Pakistani dramas have made colossal strides over the last decade nationally and internationally, raising the bar for quality writing, innovation and realism.

The prime-time offerings of our major channels are just about amazing.We truly appreciate all the hard work the teams of these best Pakistani dramas put in order to make them a success and a special thanks to all those producers who dared to be different and explored different genres, giving the viewers something unique to tune to.

Koi Chand Rakh is an extraordinary tale of love, obsession, sacrifice, and heartbreak. Zain (Imran Abbas) is obsessed with beauty. In a misunderstanding he ends up marrying Rabail (Ayeza Khan) while thinking of her as her sister Nishal (Areeba Habib). Umair, Rabail’s cousin is in love with her and Zain loves Nishal. The entangled love story is rather fiery and something you wouldn’t want to miss.

The story of Ranjha Ranjha Kardi revolves around two main characters, Noori played by Iqra Aziz and Bhola, played by Imran Ashraf. The story is about the bold and courageous Noori who belongs to a family of street sweepers and how she gets married to Bhola, a mentally challenged individual

Only four episodes old, the drama is seemingly making waves with its interesting storyline. Catch the drama every Saturday at 8pm only on HUM TV.

Sana Javed and Feroze Khan became everyone’s favourite couple after their super hit show Khaani. Khaani was a story filled with sadness and regrets. This time its the other way round, as both the lead stars are seen grooving to the beats in the first look. The modern day Romeo, played by the dashing Feroze Khan and the fun-loving Heer, Sana Javed, will surely give you Khaani nostalgia, but in a more twisted, fun loving drama series! If you’re up for rom-com drama series, catch the show every Sunday at 8pm only on Geo Entertainment.

Dil Mom Ka Diya is the story of a family where an elder brother, looks after all the siblings. He gets married to a self-centered and careless girl.

Instead of acting sensibly in taking care of household duties she creates a rift with all the family members. Things get out of hand when she starts neglecting her children.

The story of this drama revolves around the character of Sadan (Syed Jibran) who is married to his cousin Alina (Tooba Siddiqui) but loves his office colleague Rama (Faryal Mehmood). He wants to leave her wife and two children for Rama but is bound by the will of his mother who transfers all her property in her daughter-in-law’s name and makes it part of her will to bind her son in marriage.

However, there is a twist in the tale as the mother dies and Sadan throws Alina out of the house, keeps his daughters and makes Rama a part of his home and his life.

ARY Digital is rolling out yet another riveting drama Haiwaan, starring Faysal Qureshi and Savera Nadeem and we are already excited to watch it.

This drama will be highlights a social issue which is commonly faced by most of the Pakistani girls. Written by Sara Sadain Syed, this upcoming TV serial is being produced by Abdullah Seja under the banner of iDream Entertainment. The story seems to revolve around two families and how they survive difficult circumstances. It seems to be a very intense story, with a lot of emotions. If you’re into social issues, this one is for you!